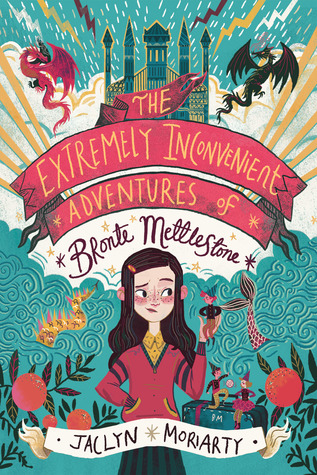 The Extremely Inconvenient Adventures of Bronte Mettlestone by Jaclyn Moriarty

Bronte Mettlestone is ten years old when her parents are killed by pirates. This does not bother her particularly: her parents ran away to have adventures when she was a baby. She has been raised by her Aunt Isabelle, with assistance from the Butler, and has spent a pleasant childhood of afternoon teas and riding lessons. Now, however, her parents have left detailed instructions for Bronte in their will. (Instructions that, annoyingly, have been reinforced with faery cross-stitch, which means that if she doesn’t complete them, terrible things could happen!) She travels the kingdoms, perfectly alone, delivering gifts to ten other aunts: a farmer aunt who owns an orange orchard, a veterinarian aunt who specializes in dragon care, a pair of aunts who captain a cruise ship, and a former rock star aunt who is now the reigning monarch of a small kingdom. But as she travels from aunt to aunt, Bronte suspects there might be more to this journey than the simple delivery of treasure.

Not only did Bronte Mettlestone’s parents die, which is a tragedy in itself, but before they were murdered by pirates, they left a list of tasks Bronte must absolutely accomplish after their deaths.

Of course, they didn’t plan on that happening when their daughter is only ten. And alas, Bronte cannot wait a few more years until she’s older, wiser and stronger, because if she doesn’t set out on this, er, adventure, her world and the people in it will be in great, great danger. There’s no way to outsmart faerie cross-stitch, a very powerful pattern.

What Bronte must do isn’t extremely daunting. She has to visit all her aunts and a few places where to eat and such. But although some of her aunts lead a quiet and sheltered life, others live among dragons, elves, and other creatures. Even the aunts that aren’t as bold get into trouble.

This is an engaging story, perfect for middle graders who seek fantasy and magic in their reads. Bronte Mettlestone, the heroine of this novel, is a dry-humoured little lady who will make you cackle and smile.

It isn’t necessarily that she’s the most courageous girl one could stumble across; it is that she has no choice but to be courageous. If she fails to deliver the gifts to her aunts and follow her parents’ instructions, she will not only disappoint her family, herself, but also the entire world, whose burden she’d have to bare.

But she does learn through her explorations. She develops her skills of observation and analysis and she strengthens her qualities and breaks out of her shell. She’s used to leading a quiet life herself, but now’s the time to see the world (and avoid its destruction in the process)! An original and thoroughly engaging tale.

3 thoughts on “The Extremely Inconvenient Adventures of Bronte Mettlestone”