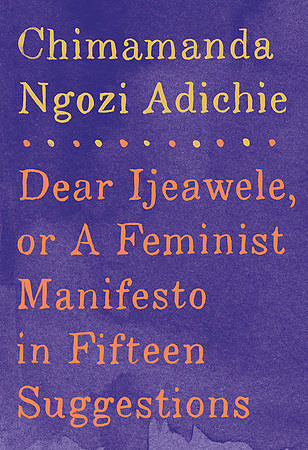 Dear Ijeawele, or a Feminist Manifesto in Fifteen Suggestions by Chimamanda Ngozi Adichie

A few years ago, Chimamanda Ngozi Adichie received a letter from a dear friend from childhood, asking her how to raise her baby girl as a feminist. Dear Ijeawele is Adichie’s letter of responseHere are fifteen invaluable suggestions–compelling, direct, wryly funny, and perceptive–for how to empower a daughter to become a strong, independent woman. From encouraging her to choose a helicopter, and not only a doll, as a toy if she so desires; having open conversations with her about clothes, makeup, and sexuality; debunking the myth that women are somehow biologically arranged to be in the kitchen making dinner, and that men can “allow” women to have full careers, Dear Ijeawele goes right to the heart of sexual politics in the twenty-first century. It will start a new and urgently needed conversation about what it really means to be a woman today.

I used to not understand why I am so opinionated, assertive and determined to be right. I am not kidding, I once was the exact replica of Hermione Granger personality-wise. I cared so much (and still do). Now I understand I have to pick my battles, but I thought maybe I was acting that way because I felt I had something to prove or was an attention-seeker.

Then my brother told me a story about my young self. I was four or five. My brother, grandmother and I were outside on the streets, spending time with other kids. I had a lovely dress on and I was twirling, watching my dress fly around me. My grandmother was watching me, smiling, and my brother was probably playing with a stick somewhere close. I paid him no mind, as usual. (Love you, B!)

Then a woman joined us and she brought with her a platter of apple-pie slices. We all ran to her, myself included. I took a piece, and after finishing it, I told the woman, ‘‘This is good, but my mom does better pies.’’ I was a kid. I didn’t understand I was being impolite. Still today, I don’t always have a filter (as you probably know if you’ve read some of my previous reviews), but I’m much more considerate of other people’s feelings.

But the woman, who was my grandmother’s friend, didn’t take it the wrong way. She said, ‘‘Really, I don’t believe you!’’ though really she was joking. So I replied, ‘‘I’m telling you! Look, I’ll bring you one of my mom’s pies and you bring me one of yours.’’

When my brother told me this story, I laughed so hard. I couldn’t believe four/five-year-old me had done something like that. My brother thought it was super funny also, ‘‘Already at four you were ever the negotiator.’’ That made me realize, hey, I was born this way. I was born with this assertiveness, this necessity to share my opinions and believe in them strongly. I was born this way so I better accept it and put it to good use, like I am doing on this site.

I didn’t mean to make this story the focus of my review of this essay/letter. I planned on talking to you about the importance of education, seeing that the author repeatedly comes back to it, and it’s true that your greatest weapon will always be your mind, your knowledge.

I shared this story because if four-year-old me hadn’t believed so strongly in herself, if people around her, who did not enjoy her loudness, had succeeded in taking that fire away from her, today I would not studying at Canada’s #1 university, in a language that is not my first, nor second. When I told my mom I wanted to study at an Anglophone school, she said I wouldn’t like it. She said it was too far. Some of my friends, who loved English as well, were afraid that they would struggle doing assignments in this language that they didn’t master perfectly. (Well, neither did I.)

But my gut was telling me it was the right choice, and it was.

Although this is unfortunate, what I’m saying is trust yourself because NO ONE else will believe in you as fervently as you can. Do not ask men if you are pretty or smart. You do not need their validation. You have eyes—you can see. If they tell you without your asking, say, ‘‘thank you,’’ don’t say, ‘‘Really, you think so??’’ Confidence and modesty are extremely attractive qualities.

About a year ago, I had a conversation with a guy that went like this:

Me: Hey what’s your final R score? [like GPA but for cegep]
Him: It’s 3.3, you?
Me: Omg, mine too! Haha that’s cool, means we’re equally intelligent!
Him: Are you sure about that?

That actually happened. I can’t make this up, not at this late hour anyway. He never said he was kidding, I thought he was, but he never explicitly said it and why would you say something like that if you didn’t believe you were superior to the other person? Needless to say, I didn’t date that guy, even if he asked me out… twice. I learned from that. I don’t ask people I’m not close to about their grades anymore and usually I only ask them if they’re happy with what they got, just so we can discuss whether we believe the assignment was graded fairly or harshly.

Do not let men tell you what you can and can’t do. You can ask for advice, that means you are exploring alternatives and are seeking different opinions, but in the end you must be the one to decide.

A beautifully-written feminist essay that I think everyone should read.

One thought on “Dear Ijeawele, or a Feminist Manifesto in Fifteen Suggestions”