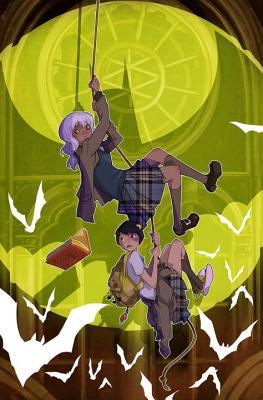 Gotham City’s most prestigious prep school is a very weird place. It’s got a spooky campus, oddball teachers, and rich benefactors always dropping by…like that weirdo Bruce Wayne. But nothing is as strange as the students!

Like, what’s up with Olive Silverlock? Is she crazy or what? Where did she go last summer? And what’s the deal with her creepy mom? And how come that Freshman Maps is always following her around? And is she still going out with Kyle? P.S. Did you hear the rumor about the ghost in the North Hall?!

I guess we could say that this wasn’t a huge hit for me, if what I enjoyed most about the comic was looking at the illustrations. I’m all for beautiful visuals and details, settings that are original and extremely graphic – easing your way into the story – but, at the end of the day, I want to read a good story.

And this was okay… I mean, it wasn’t bad, sketchy or anything, but I felt as if the characters always knew more about everything happening than I did. And I didn’t like this feeling. The narrator might have been the main character – Olive – but she kept secrets from us. It makes of this a mystery comic, indeed, but there were so many thing happening and entangled together that, when we were offered some enlightenment, this latter brought up some other new secrets altogether.

I also didn’t like the atmosphere. Thank god we had an enthusiastic character – Maps – that was often present, otherwise Olive would have bored me to death. I don’t even remember her smiling once, less telling a joke. This is when I realize how secondary roles are important too. Very.

I’m curious to see where the story is going, but only because of the dumbfounding cliff-hanger. That was some smart thinking, including that kind of ending, because it’s almost impossible not to want to read the next volume.