Clock mechanic Danny Hart knows he’s being watched. But by whom, or what, remains a mystery. To make matters worse, clock towers have begun falling in India, though time hasn’t Stopped yet. He’d hoped after reuniting with his father and exploring his relationship with Colton, he’d have some time to settle into his new life. Instead, he’s asked to investigate the attacks. After inspecting some of the fallen Indian towers, he realizes the British occupation may be sparking more than just attacks. And as Danny and Colton unravel more secrets about their past, they find themselves on a dark and dangerous path–one from which they may never return. END_OF_DOCUMENT_TOKEN_TO_BE_REPLACED

A full-color revisit to the critically acclaimed steampunk hit!

Little Lucy Snow was supposed to attend a prestigious boarding school; however, a macabre twist of fate finds her enrolled instead at Miss Weaver’s Academy for the Scientifically Gifted and Ethically Unfettered, also known as Hollow Fields. Located on the outskirts of Nullsville and run by the insidious Engineers, the grim boarding school dedicates itself to raising the next generation of mad scientists and evil geniuses!

Classes include Live Taxidermy, Cross-Species Body Part Transplantation, and Killer Robot Construction. For her own survival, Lucy must master her lessons quickly. At the end of each week, the student with the lowest grades is sent to the old windmill for detention…and so far, no child has ever returned. END_OF_DOCUMENT_TOKEN_TO_BE_REPLACED 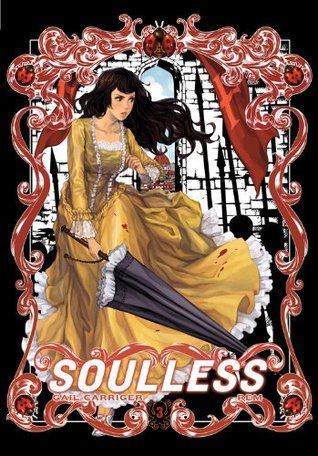 Condemned by society and her werewolf husband due to a pregnancy she cannot explain, Alexia Maccon – preternatural, tea aficionado – seeks an explanation for this “infant inconvenience” so as to cleanse her sullied reputation and prove her fool of a husband wrong. Preternaturals are a rare breed and the only history of their kind lies in Italy with the Templars, a group that once partnered with preternaturals to hunt down werewolves and vampires. Will Alexia find an explanation for her impossible offspring? Or do the Templars have other plans for the curious “Soulless One”? END_OF_DOCUMENT_TOKEN_TO_BE_REPLACED

Settling into her new life as the Lady Woolsey, Alexia finds her days quite challenging. Whether it is a regiment of supernatural soldiers camped out on her front lawn or the demands of being the Queen’s “muhjah,” there never seems to be a want of new hurdles to overcome. But when stories of supernaturals rendered normal by some unknown force begin cropping up, Alexia has a rather serious mystery on her hands. Can she root out the cause of this phenomenon, which smacks of some larger plot at work? END_OF_DOCUMENT_TOKEN_TO_BE_REPLACED

Jed and the Junkyard War by Steven Bohls

Jed is a regular kid with a normal, loving family . . . that is, if it’s normal for a loving family to drop their child off in the middle of nowhere and expect him home in time for Sunday dinner. Luckily, Jed excels at being a regular kid who-armed with wit and determination-can make his way out of any situation.
At least until the morning of his twelfth birthday, when Jed wakes to discover his parents missing. Something is wrong. Really wrong. Jed just doesn’t realize it’s floating-city, violent-junk-storm, battling-metals, Frankensteined-scavengers kind of wrong. Yet.

A cryptic list of instructions leads Jed into a mysterious world at war over . . . junk. Here, batteries and bottled water are currency, tremendously large things fall from the sky, and nothing is exactly what it seems.

Resilient Jed, ready to escape this upside-down place, bargains his way onto a flying tugboat with a crew of misfit junkers. They set course to find Jed’s family, but a soul-crushing revelation sends Jed spiraling out of control . . . perhaps for good. END_OF_DOCUMENT_TOKEN_TO_BE_REPLACED

The Adventurer’s Guide to Successful Escapes by Wade Albert White

A thrilling debut novel where fantasy and science fiction meet, dragons aren’t as innocent as they look, and nothing is quite what it seems.

Anne has spent most of her thirteen years dreaming of the day she and her best friend Penelope will finally leave Saint Lupin’s Institute for Perpetually Wicked and Hideously Unattractive Children. When the big day arrives, a series of very curious happenings lead to Anne being charged with an epic quest. Anne, Penelope, and new questing partner Hiro have only days to travel to strange new locales, solve myriad riddles, and triumph over monstrous foes–or face the horrible consequences.

Packed with action, humor, and endless heart, this debut novel marks the first volume in an irresistible and original fantasy series. END_OF_DOCUMENT_TOKEN_TO_BE_REPLACED

Dear readers, today I have the opportunity to introduce you to a new voice in Young Adult literature, Tara Sim! I have had the chance to read her novel, Timekeeper, a few weeks ago and I immediately contacted the author for an interview. I was that delightfully surprised by it. You can read my review HERE.

END_OF_DOCUMENT_TOKEN_TO_BE_REPLACED

In an alternate Victorian world controlled by clock towers, a damaged clock can fracture time—and a destroyed one can stop it completely.

It’s a truth that seventeen-year-old clock mechanic Danny Hart knows all too well; his father has been trapped in a Stopped town east of London for three years. Though Danny is a prodigy who can repair not only clockwork, but the very fabric of time, his fixation with staging a rescue is quickly becoming a concern to his superiors.

And so they assign him to Enfield, a town where the tower seems to be forever plagued with problems. Danny’s new apprentice both annoys and intrigues him, and though the boy is eager to work, he maintains a secretive distance. Danny soon discovers why: he is the tower’s clock spirit, a mythical being that oversees Enfield’s time. Though the boys are drawn together by their loneliness, Danny knows falling in love with a clock spirit is forbidden, and means risking everything he’s fought to achieve.

But when a series of bombings at nearby towers threaten to Stop more cities, Danny must race to prevent Enfield from becoming the next target or he’ll not only lose his father, but the boy he loves, forever. END_OF_DOCUMENT_TOKEN_TO_BE_REPLACED

In the magical underworld of Victorian London, Tessa Gray has at last found safety with the Shadowhunters. But that safety proves fleeting when rogue forces in the Clave plot to see her protector, Charlotte, replaced as head of the Institute. If Charlotte loses her position, Tessa will be out on the street—and easy prey for the mysterious Magister, who wants to use Tessa’s powers for his own dark ends.

With the help of the handsome, self-destructive Will and the fiercely devoted Jem, Tessa discovers that the Magister’s war on the Shadowhunters is deeply personal. He blames them for a long-ago tragedy that shattered his life. To unravel the secrets of the past, the trio journeys from mist-shrouded Yorkshire to a manor house that holds untold horrors, from the slums of London to an enchanted ballroom where Tessa discovers that the truth of her parentage is more sinister than she had imagined. When they encounter a clockwork demon bearing a warning for Will, they realize that the Magister himself knows their every move—and that one of their own has betrayed them. END_OF_DOCUMENT_TOKEN_TO_BE_REPLACED

When I first saw this book, I didn’t think much of it, but then I saw that it incorporates the steampunk genre (which we need more of) and the LGBT theme (which we need a lot more of!) so now I’m extremely excited for this book.