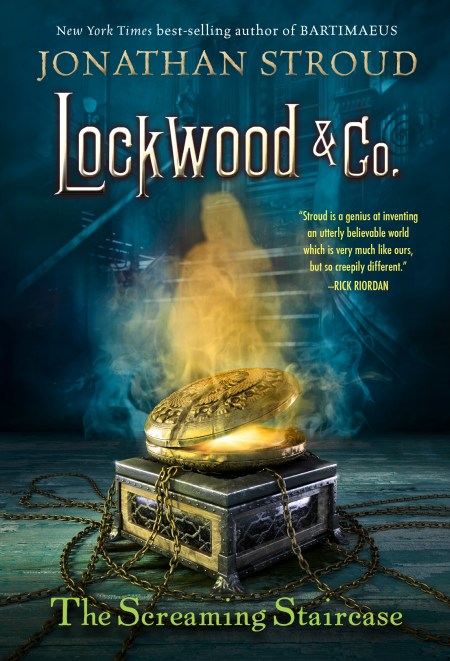 The Screaming Staircase by Jonathan Stroud

I guess it’s because I actually do believe in ghosts and spirits, whereas I don’t, for example, believe in vampires, werewolves, witches (although I’d love to be able to say that I do) or fairies. END_OF_DOCUMENT_TOKEN_TO_BE_REPLACED

The Devil’s Intern by Donna Hosie

It’s the most popular question in Hell, and Mitchell Johnson has been answering it ever since he was hit by a bus at age seventeen and inexplicably ended up in the Underworld. Now Mitchell is The Devil’s intern in Hell’s accounting office. Lately, he’s noticed a disturbing trend: the volume of new arrivals is straining Hell’s limited resources. Then Mitchell overhears his boss discussing plans to limit newcomers with a legendary time travel mechanism. With a device like that, Mitchell realizes, he could change history and prevent his own death.

Mitchell’s plot goes awry when his three closest friends—Alfarin, the Viking prince; Elinor, from 17th-century London; and Melissa, from 1960s San Francisco—insert themselves into his plans. It soon becomes clear that the fates of all four are entwined in dangerous and unpredictable ways. With unforgettable characters and a thrilling premise, this original novel is by turns funny, poignant, and thought-provoking. END_OF_DOCUMENT_TOKEN_TO_BE_REPLACED

To uncover the truth about Lucky’s death, Georgia secretly stops taking the medication that keeps away the voices in her head. But as her suspicion grows, her mental state becomes more and more precarious. Is Georgia’s mind playing tricks on her, or is the entire town walking into the arms of a killer who has everyone but her fooled? END_OF_DOCUMENT_TOKEN_TO_BE_REPLACED

Asking For It by Louise O’Neill

It’s the beginning of the summer in a small town in Ireland. Emma O’Donovan is eighteen years old, beautiful, happy, confident. One night, there’s a party. Everyone is there. All eyes are on Emma.

The next morning, she wakes on the front porch of her house. She can’t remember what happened, she doesn’t know how she got there. She doesn’t know why she’s in pain. But everyone else does.

Photographs taken at the party show, in explicit detail, what happened to Emma that night. But sometimes people don’t want to believe what is right in front of them, especially when the truth concerns the town’s heroes… END_OF_DOCUMENT_TOKEN_TO_BE_REPLACED

To Whom It May Concern: Please, we need help!

The day twelve-year-old Clara finds a desperate note in a purse in Bellman’s department store, she is still reeling from the death of her adopted sister, Lola.

By that day, thirteen-year-old Yuming has lost hope that the note she stashed in the purse will ever be found. She may be stuck sewing in the pale pink factory outside of Beijing forever.

Clara grows more and more convinced that she was meant to find Yuming’s note. Lola would have wanted her to do something about it. But how can Clara talk her parents, who are also in mourning, into going on a trip to China?

Finally the time comes when Yuming weighs the options, measures the risk, and attempts a daring escape. END_OF_DOCUMENT_TOKEN_TO_BE_REPLACED

Then Maggie’s whole world is turned upside down. Somehow, incredibly, she can see again. But only one person: Ben, a precocious ten-year-old unlike anyone she’s ever met.Ben’s life isn’t easy, but he doesn’t see limits, only possibilities. After awhile, Maggie starts to realize that losing her sight doesn’t have to mean losing everything she dreamed of. Even if what she’s currently dreaming of is Mason Milton, the infuriatingly attractive lead singer of Maggie’s new favorite band, who just happens to be Ben’s brother. END_OF_DOCUMENT_TOKEN_TO_BE_REPLACED

Hello, book lovers! Today, I have the opportunity to introduce you to a book box I just discovered not a long time ago. Kate & Michael were kind enough to offer me this complementary September READ DOG box to review it! Thank you so much.
END_OF_DOCUMENT_TOKEN_TO_BE_REPLACED

Nerd-boy Dan Cereill is not quite coping with a reversal of family fortune, moving, new-school hell, a mother with a failing wedding cake business, a just-out gay dad, and an impossible crush on Estelle, the girl next door. His life is a mess, but for now he’s narrowed it down to six impossible things…

In this charming story of one guy’s efforts to get it together when his life is falling apart, award-winning author Fiona Wood introduces an irresistible voice and a delightfully awkward character who is impossible to forget. END_OF_DOCUMENT_TOKEN_TO_BE_REPLACED

But nerd-hot Dallas, the sweet new guy in town, sends the mission and Vivian’s zing meter into chaos. While designing software for the bookstore where Vivian works, Dallas wages a counter-mission.

Operation Replacement Crush is in full effect. And Dallas is determined to take her heart off the shelf. END_OF_DOCUMENT_TOKEN_TO_BE_REPLACED

The King of Kazoo by Norm Feuti

Scatterbrained Cornelius, King of Kazoo, and his resourceful daughter, Bing, explore a mysterious cave at the top of Mount Kazoo. There they discover a famous alchemist named Quaf is planning a dangerous and forbidden experiment. Now Cornelius, Bing, and the brilliant royal inventor Torq must go all out to stop Quaf before his crazy undertaking threatens the entire kingdom. END_OF_DOCUMENT_TOKEN_TO_BE_REPLACED