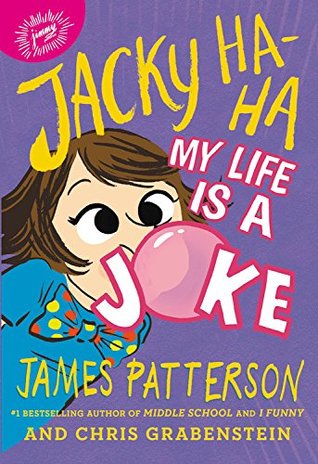 Jacky Ha-Ha: My Life Is a Joke by James Patterson & Chris Grabenstein

I was excited to see Jacky again. I don’t feel this way about every main character. Sometimes I’m excited to see a world-building again, or feel an atmosphere again, or read an author’s beautiful writing again. And sometimes… I don’t. So it’s different every time. END_OF_DOCUMENT_TOKEN_TO_BE_REPLACED

The Angel Experiment by James Patterson

Six unforgettable kids — with no families, no homes — are running for their lives. Max Ride and her best friends have the ability to fly. And that’s just the beginning of their amazing powers. But they don’t know where they come from, who’s hunting them, why they are different from all other humans… and if they’re meant to save mankind — or destroy it. END_OF_DOCUMENT_TOKEN_TO_BE_REPLACED

Cradle and All by James Patterson

In Boston, a young woman finds herself pregnant–even though she is still a virgin.

In Ireland, another young woman discovers she is in the same impossible condition.

And in cities all around the world, medical authorities are overwhelmed by epidemics, droughts, famines, floods, and worse. It all feels like a sign that something awful is coming.

Anne Fitzgerald, a former nun turned private investigator, is hired by the Archdiocese of Boston to investigate the immaculate conceptions. Even as she comes to care about and trust the young women, she realizes that both are in great danger. Terrifying forces of light and darkness are gathering. Stepping into uncharted territory where the unknown is just the beginning, Anne must discover the truth–to save the young women, to save herself, and to protect the future of all mankind.