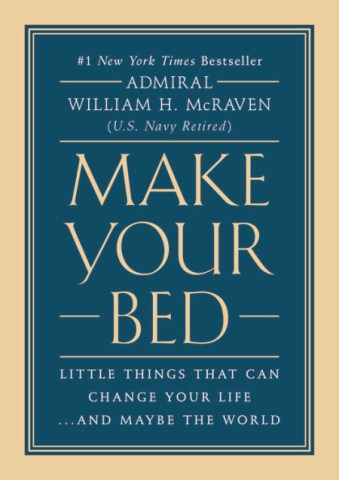 Make Your Bed: Little Things That Can Change Your Life…And Maybe the World by William H. McRaven

I used to make my bed in the morning, when I was 10-12, and not just because my mom wanted me to. I had this pink room, with Barbie bed sheets, and a dozen stuffed animals around/on my bed. When my bed was made, and everything else was organized, the atmosphere of my room was just so vibrant and my overall room so beautiful I absolutely loved spending time in it and inviting friends to join me.

But then I got older, and things like making my bed just did not seem to matter as much anymore. Things like high school, final exams, crushes, new friendships, new rivals, new TV shows, movies and books seemed to matter so much more than making my damn bed. At some point, being in my own room did not feel the same anymore and I never understood why. Was it because of the unmade bed? Was it because of some changes inside of me? I just assumed that that’s how it goes when you grow older, that the littlest of things don’t and shouldn’t matter. That focusing on making one’s bed is pointless since, you know, if you live 90 years, you’d have to do it over 30 000 times and what’s the point in that?

William H. McRaven argues that the littlest of things matter perhaps the most. They are the foundation of the bigger things in our lives. How many of us simply don’t look at certain parts of our rooms because those parts are begging to be cleaned and we just don’t care to do so? I’m guilty of letting objects pile up, especially books, and thinking that ‘‘one day, they’ll naturally get organized.’’ That’s how I feel about many other things in my life.

But see, McRaven does not believe in magically expecting stuff to happen, accomplishments to appear, tasks to get done. He’s a firm believer in doing both tasks that we want and those we don’t. He believes in not only responsibility but in personal growth. These stories and lessons he shares with us are impactful because they aren’t easy to swallow or imagine happening to a person. I personally could not say that I would be able to do what McRaven has done throughout the years. But the thing is, McRaven understands that. He understands that tools for conquering life are not handed: they’re developed through hardship and an unwillingness to give up.

You know, I agree that one should not fear hardship but I also think that, in some cases, it takes courage to ‘‘give up.’’ It takes courage to look at the situation we are in and admit to ourselves that it does not make us happy and that ‘‘quitting’’ would be the right decision. I’m a scholar, so I’m thinking particularly about contexts like beginning a program that is not what we expected or starting classes that do not have the type of outline that excites us or even starting a job that looks so intriguing and yet… isn’t. All of these things are seen a little negatively. Even going on ten dates and deciding not to pursue anything with anyone is viewed in a negative light. I’m not sure what McRaven would have to say about all of the aforementioned but while his advice is worth considering, I find it important to think on it critically. I encourage readers to see both sides and not believe blindly. After all, we’re not all looking to serve our countries. But we’re probably all looking for happiness and although McRaven does not discuss that explicitly, he does say a life well lived contains both moments of glory to celebrate and moments of despair to get through. Hope, find hope in everything, anything, anytime.