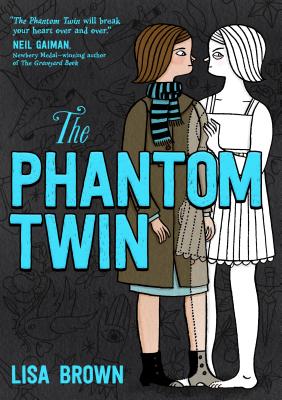 The Phantom Twin by Lisa Brown

This is sad. It has its beautiful moments but there is so much misfortune, more than necessary, I think. It has a melancholy atmosphere from start to finish that, I admit, calmed me quite a bit. Its illustrations are detailed but kid-friendly, and so colourful and soft that I felt no spookiness whatsoever, even if the story should have naturally created some.

Isabel and Jane are conjoined twins who perform at a circus. One day, a doctor appears and offers them a chance to become two separate people. Unfortunately, the experiment goes wrongly and Jane, who insisted they have the surgery, dies. Except, instead of leaving Isabel completely, her ghost remains and she has quite a lot to say about Isabel’s actions.

The story is very fast, including the beginning. One second the twins are joined and the next there is only Isabel. That means that I didn’t get the chance to really get attached or get a clearer feel of Jane’s deeper personality alive, since her ghost self is very angry and dark. Yet the fastness is one of the things I appreciated since it gave the story a sense of urgency, which matched the plotline well and, combined with the melancholy atmosphere, managed to affect me.

Isabel is naïve, so do expect her to make stupid mistakes that have small or grave consequences. I also was annoyed by the assumptions she made regarding one of the characters. But overall I tried to understand her and feel for her. I couldn’t imagine what life would be like without my own brother and, like her, I would feel quite lost and alone, probably enough to trust the wrong people, too.