I am very excited today because I am writing a blog post that I have never written before. First of all, I’m not sure I have ever reviewed a film on my blog before, and I doubt I have ever compared a book to its movie adaptation before, although I should have in the six years I have been managing Hit or Miss Books. 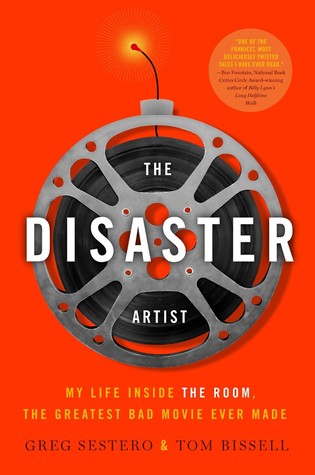 Second of all, you need to know that both the book and movie versions of The Disaster Artist are about a film. A really bad film. A film that I have watched snippets of and, it’s true what they say, it really is badly made and somewhat nonsensical, although not as bad I had expected from the book and movie.

THE BOOK THE DISASTER ARTIST

I bought this book from Book Outlet for about 4$ because I have seen very good reviews of it on Goodreads but I only read it a few weeks ago, so a year or two after purchasing it. I read non-fiction, but mainly memoirs and business books. Books about films are not exactly my thing.

But I gave this one a shot on a dare with myself to read a book that I wouldn’t normally read, even if it was on my bookshelves. From the moment I started it, I was engrossed.
It’s about so much more than just a bad movie, or a bad actor/producer/writer, or an aspiring Ken-like actor. It’s about all of those things and more—friendship, dreams, society’s expectations, self-belief and being able to laugh at life.

I liked Greg, the narrator, a lot. I liked him because he never tried to sell himself to us. He was honest about both his falls and accomplishments. And I found humbling the amount of time he spent talking about others, more specifically his new eccentric friend Tommy Wiseau and the people he met while working on The Room. He was charming and compassionate.

This book’s first 100 or so pages are hilarious. After that, it gets heavier. But the humour comes back again at some point and, all in all, The Disaster Artist is a unique reading experience. Like I said in my one-sentence review of the book on Goodreads, no book has ever made me laugh as hard as this one did.

THE MOVIE THE DISASTER ARTIST

Of course I needed to watch it. After sensing discomfort in my belly from laughing so hard while reading the book, I jumped on my computer and started the movie. I was only going to watch the on screen version up to the point where I was in the book, not further.

It turns out I really didn’t need to control myself because I didn’t laugh while watching the movie. I did smile at times though. But it is not the same as the book: scenes were modified, erased or added to create another version of The Room, Tommy Wiseau and Greg’s stories combined.

It also made me feel uncomfortable. While in the book there is this one described scene in which an actress has some visible pimples on her back that Tommy notices and she is publicly reprimanded for, it didn’t feel nearly bad as the graphic scene in the movie where the girl is auditioning and as part of the audition has to lick ice cream while Tommy and Greg are watching. I don’t remember that being included in the book and it’s just a poor, male-gaze-type and just disgusting Hollywood choice.

I never finished the movie. (Because I don’t hate myself.) Not only did it make me cringe a lot, but it also made Tommy appear so pathetic. It’s true that in many cases, the movie Tommy is acting in the same way the book Tommy did, but somehow through the eyes of Greg he seemed unique, interesting (the type you’d want to get to know) and HILARIOUS. Through the eyes of the Hollywood director, and everyone who worked on producing the movie, Tommy definitely did not look like the type of person you’d ever want to befriend or take advice from.

So if you ever find yourself wondering whether you should read the book or watch the movie, and in what order, I suggest sticking with the book and then maybe watch The Room to understand the book better. The Disaster Artist movie will not give you additional insight.

5 thoughts on “The Disaster Artist, Book or Movie?”