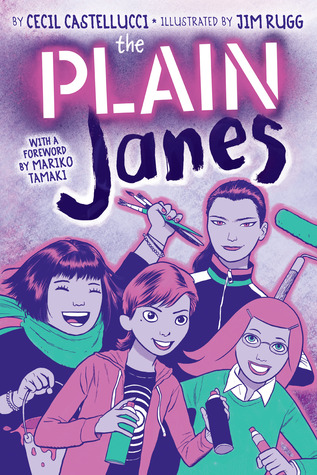 This graphic novel makes the following claim, supported by multiple events, throughout its story: that art saves. That without it, we can easily drown underwater and lose sight of the beauty that surrounds us even in bleak times.

Jane Beckles is the new girl in school. She suffers from PTSD after being at the wrong place at the wrong time and is now doing her best to put the past behind. But it is haunting her. One way she found to cope, somehow, was to create an art collective called P.L.A.I.N. with other girls—all named Jane or Jayne—from her new school.

Together, these girls dare to create art in their neighbourhood. They dare to express themselves and even challenge the authorities. They gain allies—and enemies—along the way but no one can take this away from Jane Beckles. Meanwhile developing art projects, their lives continue and each Jane works toward her own future.

While Jane Beckles is the main character and we don’t get to know the other Janes as well as we know her, since we’re in her head all the time, I still enjoyed seeing the Janes grow up and explore their own respective passions other than art. And even find love.

I did not understand Jane Beckles’ relationship with her love interest, and I still don’t know much about him presently or trust him to be courageous enough to commit to her, really. But he is there for her, that I cannot deny. At times, this graphic novel is childish, like when one of the Janes creates a substance which has an unrealistic effect, but other times it’s very mature, realistic and inspiring.