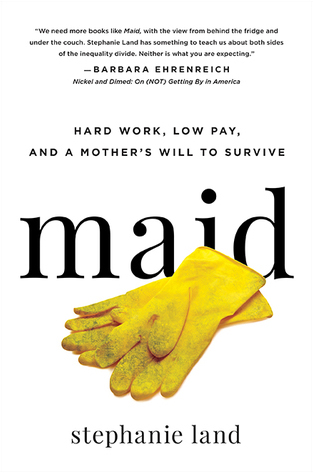 Maid: Hard Work, Low Pay, and a Mother’s Will to Survive by Stephanie Land

The low average rating for this one baffles me.

Personally, I was completely consumed. I had never read something like this before. Stephanie Land opened my eyes and made me face the truth about so many issues I had never thought much about before. She also made me realize that there are ways to discuss poverty and financial issues with dignity, elegance and strength.

Stephanie Land did that. In her memoir, she discusses working as a maid while caring for her daughter and receiving help from government programs. Programs that are strict and do not allow her to breathe easily.

I think many people assume, myself included, that people who receive help from the government are not doing enough. But I was shocked to discover that it’s not about being unwilling to work and contribute to society just like everyone else. It’s not so simple. Stephanie Land works hard and well, and yet, she cannot escape her own situation. Government programs barely help her survive, let alone get back on her own two feet.

I’ve read a couple of reviews and seen some people criticise Stephanie’s decisions or actions. You can do that, certainly. But I wasn’t able to, personally. There wasn’t one moment I told myself, ‘‘Fuck, Stephanie, why did you do that?’’ There was no way I could judge anything she did so long as she provided for her daughter and loved her with all her heart, which she did. It’s easy to judge from the comfort of your home, but hell I’ve never been in Stephanie’s shoes. Who knows if I would have done better? Seems to me like Stephanie did the best she could and I applaud her for it.

2 thoughts on “Maid: Hard Work, Low Pay, and a Mother’s Will to Survive”