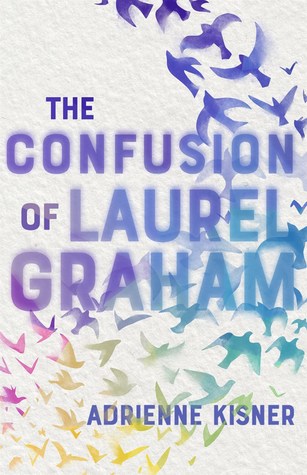 The Confusion of Laurel Graham by Adrienne Kisner

I actually finished this book over a week ago but I was in my exam period and for the first time in I don’t know how long, I did not feel like writing a review for a book immediately after being done with it.

Part of it is that I find writing reviews for 3-star-rated books more boring than writing reviews for books I adore or hate. Because it’s good, but it’s not great. It’s readable but I wouldn’t re-read it and would only recommend it to specific people.

The other reason is that I read the first 220 pages fast and then completely lost interest for the rest and let the book lie on my desk, collecting dust, for a solid two weeks. Without any kind of remorse. Then I finished it… because I was so close… but I was thinking about the finish line more than the story itself.

As I said, it’s not a bad book. Actually, I liked the premise: one girl obsessed with birds trying to save a nature sanctuary while her grandma is in a coma and she is also trying to deal with her interest in another girl she may or may not consider her enemy.

God, I love slow burns. But this was slow x 10. It was so slow that there was no tension between the two girls, you know what I mean? They took their sweet time getting to know one another and grew comfortable with one another so that they fell in love gradually and built something meaningful between the two of them naturally.

That’s something I, personally, want to experience in real life. But somehow reading about it was underwhelming because it was just sweet, not extremely exciting. Neither of them lost control in the presence of one another as you might be tempted to after meeting someone you’re extremely attracted to. If they did, it must not have been memorable because I can’t remember.

But in a way it’s okay because the focus of the story was on saving the nature sanctuary, which a lot of people ended up being involved in. I don’t particularly care about birds but I was rooting for Laurel and her friends the whole time. It does get repetitive, and it is kind of predictable, but I was satisfied with the way things ended.

If it weren’t for Laurel’s engaging voice, however, I probably would not been able to read much of this story. She was the story for me.