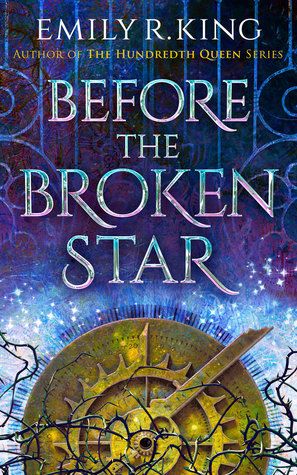 Before the Broken Star by Emily R. King

I basically despised this author’s The Hundredth Queen and couldn’t finish it (if that’s of any surprise) so it slightly unsettled me when I took hold of this book, opened it, started reading it… and finished it pleased enough by the events and characters.

It was good, it was actually good. I remember disliking the tropes in The Hundredth Queen and finding the characters one-dimensional and the plot too familiar. Even the writing I think didn’t capture me. But this was… different. The world-building is odd, but a good kind of odd that encourages your curiosity.

It’s a mix of historical fiction, science fiction and fantasy. Historical fiction: the land is ruled by a queen, the characters behave like they’re in 18th century England so you can expect women to be subdued, sadly. Science fiction: time plays an important role with a Father Time who controls it. Also, the heroine has a clock heart (oh, steampunk!). Fantasy: there are myths and legends and magical creatures such as fairies and witches.

It’s a rare combination, which is what fascinated me most. And it really, really helped that the author explained everything in a clear way. Too many writers create worlds that THEY seem to understand like no one else. Literally because the reader can’t make heads or tails of it. Such was not the case here. The dialog was clear. Characters’ intentions were clear (unless they were purposefully ambiguous). A good book is a book you can actually read and understand and this was definitely that. This is especially important if said book is driven by action as much as by its characters, which applies here.

I would have appreciated a less pessimistic heroine… Someone who thinks about the joys of life more than the hardships of it and what life has taken from her. Someone who trusts people more and takes time to get to know them, like the love interest does. But at least she’s more likeable than the weird villain. His character is so forced it’s comic. If he were in front of me and smirking, I would just throw a pie at him because he’s too much, man.

All in all, good job, Emily R. King. I’m happy I could finish your book and enjoy it in the process.