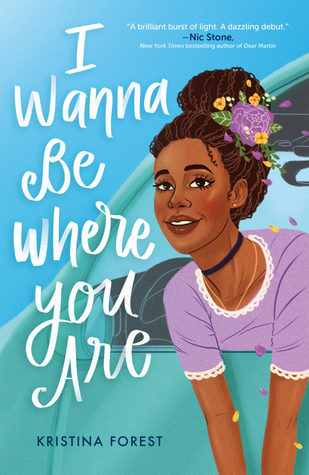 I Wanna Be Where You Are by Kristina Forest

Isn’t the cover just lovely? It makes me think that it wouldn’t be so bad living in a 2D world if everything looked so soft and colourful. Still, let’s keep it 3D for now.

This is a decent story. It is fairly short and well-paced so it will most definitely not feel like a chore to read. I don’t always ask my reads to amaze me, I understand that every story is different and we’re all drawn to distinct things. But I do ask my reads to think of me sometimes, as in EXPLAIN what’s happening in a way that I can understand.

This is a road trip story. Chloe has an audition she must attend at a new dance school that could change her entire life, but she’s driving there against her mom’s wishes—actually, her mom doesn’t even know; she would FREAK OUT if she knew. She ends up stuck with her neighbour and ex-friend Eli on the road so her plan is already shifting. But maybe you don’t need to plan everything… maybe sometimes you should just let life work its unexpected magic.

I liked it. I liked the road trip. The dimensional main and secondary characters. I even liked the conflicts; they felt realistic and appropriate. What I didn’t like as much, and this goes back to my point in the second paragraph, was that I personally felt like the author didn’t think of her readers sometimes. For example, she introduces back-story VERY late, so until that happens, we’re a bit confused as to why exactly Chloe hates Eli and this confusion made it hard for me to understand their relationship.

It’s as though the author wanted to maintain some kind of mysterious atmosphere that I think was not at all required and actually took away more than it offered. But once back-story was offered, I became much more invested in the story and characters. Too bad it took so long because this could have potentially been a 4-star book.