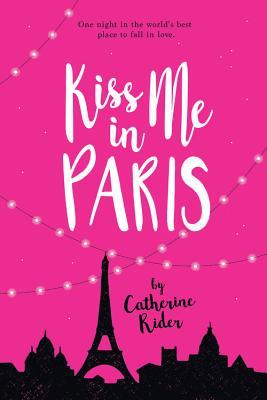 Kiss Me in Paris by Catherine Rider

Serena Fuentes won’t waste one moment of her whirlwind trip to Paris. She has it all mapped out, right down to the photos she will take, and the last thing she wants is a change in plans. Yet suddenly she’s touring the city with Jean-Luc, a French friend of her sister’s boyfriend. He has to take pictures of his own if he ever hopes to pass his photography class, and his project totally slows Serena down. Why can’t he get with her program? One minute they’re bickering, the next minute they’re bonding … and soon they’re exploring corners of Paris together that Serena never imagined. When it comes to love, sometimes it takes a different lens to see what’s right in front of us. A romantic adventure for anyone who sees the possibilities in a spontaneous tour of the City of Lights with a charming French stranger, and anyone who’s ever wondered if true love is waiting on the other side of the ocean.

I requested this book because I was convinced it would be a fun romance in the City of Lights, similar to Anna and the French Kiss, which I absolutely adored.

But it’s not. For starters, this heroine is deeply annoying. I cannot stand people who visit other countries and instead of absorbing with interest and an open mind, they judge and compare and can’t stop talking instead of listening. At least try to understand before sharpening your tongue.

Of course there are things that you’re going to find unusual or that are going to boggle your mind. But that’s because every culture is different and has particular ideologies. A country is not just its architecture and places for sightseeing.

Honestly, although I sure was hoping for a love story, which I did get, now I find it regretful Serena and her sister’s relationship wasn’t more explored. Serena was supposed to visit Paris with her sister but the latter ended up going off to I-forget-where with her boyfriend instead.

It’s not particularly well written either. It sure reads like a debut. There’s just so much I would change here if I could. I didn’t find any of it charming—not the writing style, not the heroine or love interest, and I had to force myself to flip pages because I wasn’t gripped at all. I definitely understand why the average rating on Goodreads is so low.

But I don’t like mentioning only negative things about a book so I’ll end by saying that I liked Serena’s reasons for visiting Paris.

One thought on “Kiss Me in Paris – Catherine Rider”