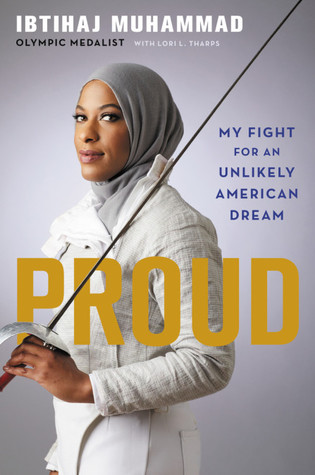 Proud: My Fight for an Unlikely American Dream by Ibtihaj Muhammad

Growing up in New Jersey as the only African American Muslim at school, Ibtihaj Muhammad always had to find her own way. When she discovered fencing, a sport traditionally reserved for the wealthy, she had to defy expectations and make a place for herself in a sport she grew to love. From winning state championships to three-time All-America selections at Duke University, Ibtihaj was poised for success, but the fencing community wasn’t ready to welcome her with open arms just yet. As the only woman of color and the only religious minority on Team USA’s saber fencing squad, Ibtihaj had to chart her own path to success and Olympic glory.

I have read memoirs from Olympians in the past—one of my favourite ones is Aly Raisman’s FIERCE—but what surprised me most in this athlete’s case was that she didn’t start training at the age of five or was born into the ‘‘game.’’ Her parents are not athletes and she had very few people she could look up to.

So Ibtihaj Muhammad had to look up to herself basically. She had to become the ‘‘first’’ in different situations because the world of sports—and fencing more specifically—was not used to seeing Muslim women compete. Some people had her best interest at heart—her family, mainly—but others wanted her to fail badly.

I couldn’t believe her own teammates would treat her so coldly. The trainers—fine, they care only about their own students—but what of sportsmanship? What of sisterhood? After reading Aly Raisman’s memoir, in which I remember her praising her teammates profusely, I expected every sports team member representing a country to be, if not extremely close due to long hours spent together, at least cordial to one another.

So the author talks a lot about the obstacles—both physical and psychological—she had to face. The list goes on and on and on for a long time. Fencing did not welcome Ibtihaj with welcome arms at all, and I’m glad I got to read this memoir, because prior to reading it I found incredible that the people of the US have come a long way being so open about having a Muslim woman wearing a hijab represent their country. But it turns out that Ibtihaj competed DESPITE all the people who didn’t want to see her succeed.

It’s a very motivational read. The reason why I am not giving it four stars, which I considered doing in the beginning, is because it reads, at times, like a biography written by someone else—everything is so carefully laid out and there are little conversations, more description than anything else. I didn’t feel the intensity that some situations deserved. It’s powerful but I’m not going to rush to reread it. Not surprisingly, I found myself enjoying the parts that didn’t focus on fencing competitions the most—her coming of age, going to college and starting a business, as well as her love for her family.

2 thoughts on “Proud: My Fight for an Unlikely American Dream”