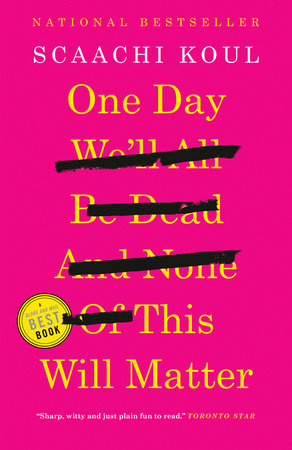 In One Day We’ll All Be Dead and None of This Will Matter, Scaachi deploys her razor-sharp humour to share her fears, outrages and mortifying experiences as an outsider growing up in Canada. Her subjects range from shaving her knuckles in grade school, to a shopping trip gone horribly awry, to dealing with internet trolls, to feeling out of place at an Indian wedding (as an Indian woman), to parsing the trajectory of fears and anxieties that pressed upon her immigrant parents and bled down a generation. Alongside these personal stories are pointed observations about life as a woman of colour, where every aspect of her appearance is open for critique, derision or outright scorn. Where strict gender rules bind in both Western and Indian cultures, forcing her to confront questions about gender dynamics, racial tensions, ethnic stereotypes and her father’s creeping mortality–all as she tries to find her feet in the world.

I am rooting for this author. I really am. Her personality and mine couldn’t be more different and her experience being a college student was nothing like mine—I can’t even stand the smell of alcohol, let alone drink it. And yet, I still am rooting for her.

She asks the right questions. She pushes at the right times (usually). She seeks to understand. She seeks to expose. The wheel in her brain is forever turning. Her claws come out once in a while, but she’s not destructive.

It’s then not surprising to me that she is being compared to author Roxane Gay, whom I have discovered recently and adore. Both women discuss sexism, feminism, rape, the life of minorities and the difference between cultures. The only thing is, although Roxane Gay managed to surprise me and shock me to the point of staring into space for entire minutes, Scaachi Koul… never did.

She has interesting opinions and ideas. She explores them well enough. She is someone who has a lot to say and would make for a fabulous interviewee. But she doesn’t exactly think outside the box. She speaks her mind—that is to say, argues against—patriarchy, especially in India, the female body as commodity, stereotypes and other such issues.

She teaches beautifully, her writing eloquent and her ideas clear, but she rarely introduces anything new. Because I knew little about Indian marriages, I learned how those tend to unfold. But when she talks about, for example, rape culture, her thoughts are so like my own—a feminist—and other authors who have written about it in the past that I read more out of desire to just *read* than because I *needed* to know more.

Overall, not a bad memoir, but some essays could have been more original.