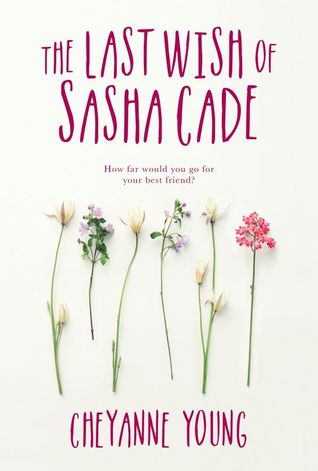 The Last Wish of Sasha Cade by Cheyanne Young

The day Raquel has been dreading for months has finally arrived. Sasha, her best friend in the whole world—the best friend in the whole world—has died of cancer. Raquel can’t imagine life without her. She’s overwhelmed and brokenhearted. And then a letter from Sasha arrives. Has she somehow found a way to communicate from the afterlife? In fact, Sasha has planned an elaborate scavenger hunt for Raquel, and when she follows the instructions to return to Sasha’s grave, a mysterious stranger with striking eyes is waiting for her. There’s a secret attached to this boy that only Sasha—and now Raquel—knows.

It’s rare that I find myself completely compelled by the charm of a dead character as much as I am by that of a living one—because of the death issue, duh—and yet Sasha Cade stole my heart from the very first chapter.

The thing is that while Sasha Cade dies of cancer at an unexpected moment, she departs from the living world leaving more than one trace behind. Her best friend Raquel—the narrator—wasn’t expecting to hear Sasha’s voice again, nor read her post-mortem words, but that’s exactly what happens soon after she dies. Because Sasha has something special planned for Raquel and a certain other person who means a lot to the deceased.

I am sad. I am sad because I have a feeling that this book will not get the attention it deserves. I even tried requesting it for my library through Overdrive and I couldn’t find it or any of the other books from this publishing house I searched for. Unfortunately, oftentimes books from lesser known publishing houses don’t get enough attention and that’s a shame, but here I am to speak in favour of this amazing story and hopefully encourage you to pick it up.

This is not a debut, nor does it read like one. The author knew what she was doing from the start. It shows that she planned the plot carefully, but not too carefully that it seems mechanical or that it’s too predictable. But she wrote of grief, friendship, love and life so well that I for one had the impression she was an expert in those topics. That’s absurd—no one can be an expert in all those things at once—but I sure felt all of the characters’ emotions as though everything was happening to me as well and I sure cried at least five times. I am not kidding. Some of the emotions are so intense that my eyes would water automatically upon reading about them.

THE LAST WISH OF SASHA CADE is close to perfect and I sure debated upping my rating to five stars but in the end I couldn’t grant it a perfect score because I did not find Raquel’s work situation to be all that realistic—no boss would be okay with their employee suddenly deciding to take multiple days off, whether they know you or not, especially if it’s been weeks since your friend died. Her boss appeared too good to be true and Raquel should have been more remorseful about leaving her boss on her own to take care of everything. Furthermore, Raquel’s reaction to a certain character telling her about changing their living situation bothered me as it was kind of hypocritical.

But these are things that, although they still matter, they spoke of Raquel’s imperfection without causing me to dislike her and I can proudly say that this is one of the best books about friendship and teen romance I have read this summer. I am extremely excited about what this publishing house will present us with next and wish them more recognition in the future.

2 thoughts on “The Last Wish of Sasha Cade – Cheyanne Young”