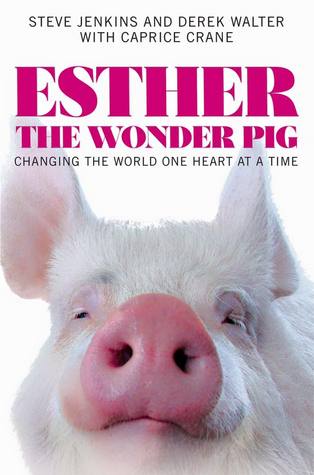 Esther the Wonder Pig: Changing the World One Heart at a Time by Steve Jenkins

In just two short years, Steve and Derek have cemented a place for themselves among the worlds most well-known and successful animal activists, accumulating hundreds of thousands of followers from all over the world. In 2014 Steve and Derek founded the Happily Ever Esther Farm Sanctuary in Campbellville, Ontario, where they continue to rescue and rehabilitate abandoned and abused farmed animals.

I like to read about everything and anything (almost), but I never once thought I would one day read a book about a pig and how she changed the lives of two people… and love it so much.

When Steve and Derek adopted Esther, the pig that would change their lives, they thought she was a miniature pig of a sort and wouldn’t grow very big. They were dead wrong. It turns out that Esther is a commercial pig through and through and while both men aren’t ready to take care of a pig (in a house above everything!), they fell so deeply for Esther that they must at least try.

This was absolutely heart-warming. Aside from the story of how Steve lost his dog when he was young, everything in it warmed my heart. It’s true that Esther is known to turn a house upside down, and oftentimes Derek and Steve had to hang their heads in disappointment, but these obstacles just proved that there is a solution to most things and when one wants to accomplish something, one can. And besides, Esther is hella hilarious. I didn’t think a pig could be this smart. She literally tries to deceive her caretakers by coming up with a plan to steal food without them noticing—that’s when she cares to at least try to stay out of trouble, that is.

But that’s not all that’s great about this book. Steve—the narrator—rarely tries to preach to us. Yes, he now believes that eating pork or any meat and animal-derived product is not right anymore for him, and he does wish to change people’s minds about eating these products, but he isn’t aggressive about it and is overjoyed if even one single person admits they stopped eating pork after hearing about Esther’s story. After all, Steve and Derek themselves weren’t always vegan, so they understand that it usually takes a ‘‘revelation’’ or a meaningful moment for someone to decide to change their diet for the rest of their life.

This unconventional memoir was a delight from start to finish. My only complaint is that it is EXTREMELY short—190-ish pages of story and so only a couple of chapters—but I did hear of a sequel that came out recently so I’m at least happy I’m going to hear more from Steve and he and his partner’s adventures caring for Esther and the rest of their family members. It’s adorable that they consider their pets to be family members. That’s how it should always be, I think.