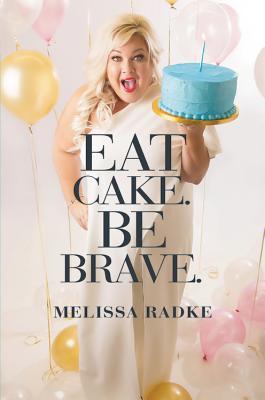 Hilarious and heartbreaking, this is one woman’s inspiring journey of learning to stand up for herself in a world of naysayers, by the creator of the “Red Ribbon Week” video, which has over 150 million views.

I have been thinking about cake for the last eight hours and, in case you’re wondering, it’s most certainly Melissa Radke’s fault. And it’s torture because I’m trying to eat healthy food only for the next two months to see how my body reacts. Thanks a lot, Mel.

Melissa Radke was right when she said that whoever picked this book up would end up loving her. I didn’t know her before, and I still don’t know many things about her, yet I can’t help but feel like we’ve become friends somehow. A one-sided relationship, no doubt, but it has been a privilege reading these stories. I even checked her popular ‘‘Red Ribbon Week’’ video immediately after closing the book and I damn well recognized the woman I’ve been reading about for the past hours.

Melissa is someone who writes with feelings, not words. She uses words to convey her emotions, but they’re not what she needs to express a thought or relate an event. Her stories are intense because she, herself, is intense. You easily hear her personality and tone in the narration style. I often forgot I was reading a book and had the impression I was spending an afternoon at a coffee shop with the author herself.

But as much as I came to adore Melissa and sympathized with her as she was telling us about her failed pregnancies, miscarriages, and marital problems, I do have to mention that these stories are extremely short. I am immensely happy that this book was published because there is substance in it and humour almost everywhere, but I would have preferred if Melissa had focused on less than more but in a sometimes shallow way. In other words, she often skims or mentions an issue multiple times before even getting to it.

For example, we know from the beginning that she has been married for longer than two decades and that at least six of those years were unhappy. She says it a couple of times. But when she actually gets to talking about what drifted her and her husband apart, she discusses it very briefly, mentioning only the main events, although it seemed to be on her mind always. It’s as though she wants to be open but not TOO open.

This is Melissa’s first book and it isn’t perfect, but the short stories are either meaningful or entertaining. Sometimes both. Melissa says she decided to be brave when she turned forty, but you know what, I think she was very brave from the moment she set foot on this earth. If she ever writes another book, I’ll be there for it.

One thought on “Eat Cake. Be Brave. – Melissa Radke”