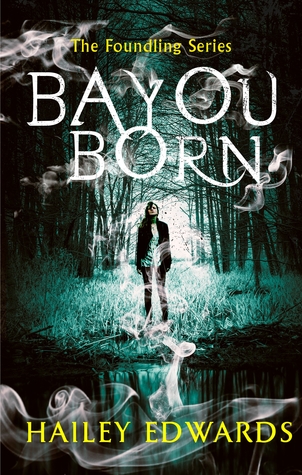 Deep in the humid swamps of the Mississippi bayou, a mysterious, half-wild child is dragged just in time from the murky waters. She has no memories, no family and is covered in strange markings, the meaning of which no one is able to decipher. Adopted by the policeman who rescued her, Luce Boudrou follows him into the force, determined to prove herself in the eyes of those who are still suspicious. However, there’s more of a battle ahead than Luce could possibly imagine. She may be an orphan without a past, but no one – including Luce herself – could ever be prepared for the truth of her dark, powerful destiny…

I can’t remember the last adult urban fantasy novel that I read. It must have been a long while ago. I have this huge problem where I can’t bring myself to finish long series, and we all know how long urban fantasy ones can be, so I decided to pick and choose which ones I think would work for me the most.

This is unlike any fantasy book I have read, and yet it does feel familiar at the same time. How many characters have blurry pasts or pasts they don’t remember at all? Too many, especially in YA fiction, a category I read constantly, which is notorious for things like dead parents, amnesia-afflicted protagonists and random superpowers.

But that’s Luce Boudreau. She was found in a swamp, with no recollection of who she is and why she has those strange marks on her body. Due to that episode, she became famous in her town. Everyone knows of the girl who was found in the water. This sure doesn’t help her do her job as a policewoman at times. Normally I wouldn’t mention such a thing, because who cares if other people know her name, but Luce mentions it in EVERY SINGLE CHAPTER.

This is a mystery book with different mystery cases. Usually, there are maybe one or two mystery cases in such a story, but lots of bad situations arise here. First there’s the girl who disappeared, then there’s the girl who was found and Luce needs answers from, then there’s another girl who just disappeared and Luce must find her at all costs. It doesn’t focus on one element or storyline, my point is. That’s not necessarily wrong. But it’s something to get used to and I wish I had known that before starting the book so I didn’t feel so confused.

The characters are fleshed out, and this is especially important when it comes to series. There’s no point in reading a series if the characters aren’t memorable. But these ones are three-dimensional and have different personalities. Some I liked, some I disliked. I enjoyed reading about the love interest, Luce’s friends and father (or ‘‘Daddy’’ like she calls him). Unfortunately, half of the time, I found Luce Boudreau insufferable. She is arrogant, sarcastic and focuses too much on her celebrity status, worrying about it over and over when, personally, I was like, ‘‘WHO CARES???’’ She also doesn’t make it easy for us to get to know her, seeing that she’s a pretty private person, but she does open up with the right people.

There is a lot of exciting stuff in this book, such as the mystery cases, the weird swamp, Luce’s peculiar body, but I do not find Luce’s personality attractive enough to care about what happens to her in the future sequels.