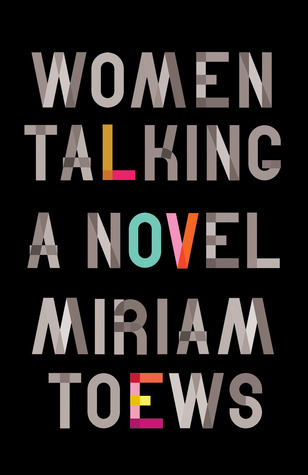 The novel takes place over forty-eight hours, as eight women gather in secret in a neighbour’s barn while the men are in a nearby town posting bail for the attackers. They have come together to debate, on behalf of all the women and children in the community, whether to stay or leave before the men return. Taking minutes is the one man trusted and invited by the women to witness the conversation–a former outcast whose own surprising story is revealed as the women speak.

This is, without a single doubt, the most important book I have read all year.

But perhaps one is enough. Perhaps that one option can open multiple other possibilities. If the women arrive to a conclusion, that is.

Already from the straight-forward title, you know 90% of what is happening in this book. Women are talking about their situations and trying to imagine a safer future for themselves and their children.

This is a work of fiction, and yet Miriam Toews wrote this book as a reaction to real life events that have happened in a Mennonite colony in Bolivia. In this colony, women were raped in the night by ‘‘unwelcome visitors,’’ believed to be demons sent by the devil himself to punish the women for their sins.

But the truth came out. It was the men who committed these acts. Men who raped women, teenage girls and even young children. The accused men were incarcerated, but in this version of the story, the Priest and the majority of the other men plan to bail them out without consideration for the women.

And, in a patriarchal society, what can women—who have been oppressed all their lives by their fathers, their husbands and even their sons and whose thoughts don’t matter—do to stop these violent acts against them and start leading peaceful lives?

That is what Greta, Agata, Mariche, Ona, Mejal, Salome, Autje and Neitje—the youngest in the group—are pondering. August Epp, the man who records these conversations also participates in the discussions at times. He is someone the women can trust. Everyone has a role to play and everyone’s voice is heard… for once. Even the youngest ones, Autje and Neitje, gain confidence and become involved in their own ways, despite being reluctant to participate in the beginning.

I cannot imagine discouraging anyone from reading this incredible story. The format is original, yes, and the themes salient, of course, but it’s also utterly captivating. If you know me even a little, you know that I don’t give high ratings to ‘‘important books’’ whose important ideas were poorly developed. Otherwise I would have definitely given The Kiss Quotient five stars. But this, this is everything.