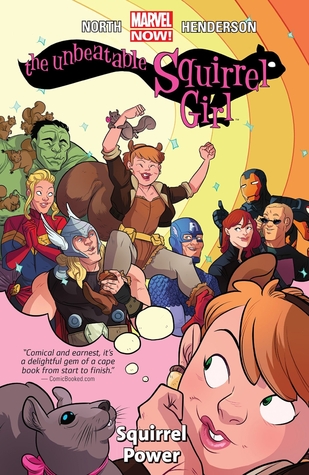 Wolverine, Deadpool, Doctor Doom, Thanos: There’s one hero that’s beaten them all-and now she’s got her own ongoing series! (Not that she’s bragging.) That’s right, you asked for it, you got it, it’s SQUIRREL GIRL! (She’s also starting college this semester.) It’s the start of a brand-new set of adventures starring the nuttiest and most upbeat super hero in the world!

I will never look at squirrels the same way again.

Man, this was incredibly entertaining. I was hoping it would be good, but I shamefully thought it wouldn’t blow me away because, I mean, look at it. IT LOOKS COMPLETELY NUTS.

And I guess it is. The way Squirrel Girl fights villains is so different from any other hero or heroine. I thought Ms. Marvel was one of a kind, but then I met this gal and, well, there’s always place for more badass women and originality in the comic world.

It’s interesting but it usually takes me at least two volumes to fall in love with characters. Yet, Squirrel Girl stole my heart the moment she started singing that catchy song, literally on the first page of this comic.

I like her so much and surprisingly see myself in her. She’s not only a kick-ass superheroine; she’s also a university student – like I am… the second part, that is. She’s serious about her college experience but also about fighting evil.

The reason why the way she fights is different from anything I’ve seen before is that she tries to avoid it at all costs. She’s actually a pretty chill girl and isn’t excited by the idea of punching and kicking, unlike so many villain-fighters are.