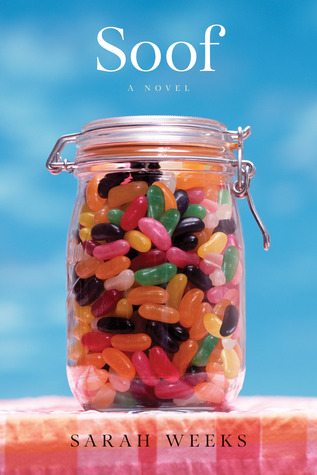 All her life, Aurora has heard stories about Heidi and all the good luck she brought Aurora’s family. Aurora, though, doesn’t feel very lucky. The kids at school think she’s weird. And she’s starting to think her mom thinks she’s weird, too. Especially compared to Heidi. On the eve of a visit from Heidi, more bad luck hits Aurora’s family. There’s a fire in their attic, destroying a good part of their house. And, even worse, Aurora’s beloved dog goes missing. Aurora and her family have always believed in soof — Heidi’s mom’s word for love. But sometimes even when soof is right there in front of you, you still need to find it — and that’s exactly what Aurora is going to do.

Soof is the companion novel to So B. It. But it’s a companion novel like Leah on the Offbeat is a companion to Simon vs. the Homo Sapiens Agenda. At least, that’s how it was marketed at first, before its status was changed to ‘‘sequel,’’ which speaks volumes.

So one should be careful before picking up a ‘‘companion novel.’’ I should have been careful. I mean, how was I supposed to know that I would be tremendously spoiled for So B. It? From my experience, companions are like ‘‘spin-off’’ novels or series, like Six of Crows is to The Grisha Trilogy.

But alas, that is not the case here. Heidi is mentioned multiple times in basically every chapter, and even though she only appears in the last ones, she’s pretty much a main character. Also, the author never seems to lack situations where to mention Heidi’s past, and lots of other content from So B. It, thus spoiling me over and over again.

It’s not her fault. I mean, I wish she had considered that maybe some of her readers hadn’t read So B. It yet, but I’m not actually mad. Anyways, if I should be mad at someone, it’s at myself.

Now that I got that off my chest, I can tell you all that this is a lovely story and Aurora a relatable girl, which is surprising because the way she’s characterized – with all her quirks and inability to connect to people her age – you’d think we wouldn’t either. But I could. I’m introverted myself, and have small or large quirks that set me apart, just like she does.

She makes this story. Heidi is important here, because she is visiting Aurora’s family and she’s the one who apparently made it possible for Aurora to be born in the first place, but I do believe this would have been enjoyable even without her in the story.

It’s heart-warming and there isn’t a two-dimensional main or secondary character. I especially enjoyed witnessing the interactions between Aurora’s parents. Honestly, they are couple goals. I looked at them, saw the way they were behaving around each other, and it made me think that that’s exactly the kind of relationship I want to have and that I shouldn’t settle for anything less.

Unfortunately, it’s extremely short. My copy has 191 pages, and in my opinion that’s a low number, even for a middle grade book. So while the content is good, there’s also little of it, considering the font is large and Heidi mentioned at least twenty times out of jealously or admiration. (Aurora isn’t exactly fond of her.)

But it’s worth your time regardless. Just don’t expect too much from it.