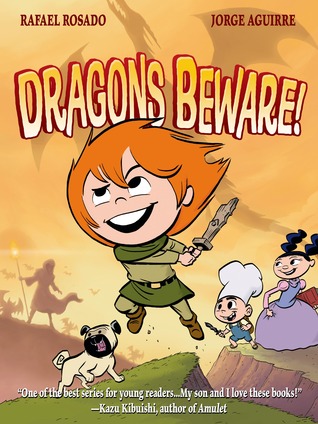 Scrappy Claudette sets out once again with her pal Marie and her little brother Gaston to right wrongs and fight evil. And this time, it’s personal. Claudette is out to get the dragon who ate her father’s legs…and his legendary sword. But as usual, nothing is as simple as it seems, and Claudette is going to need Marie and Gaston’s help more than ever.

Claudette is back! YAY!

She’s been gone for three years. That’s a long time, man. Fine, so I shouldn’t complain because I only discovered her recently so it’s been a couple of days for me between sequels, not years, but I strongly feel for those who had to wait entire years to get their hands on this one.

But thank goodness she’s back, because two days is quite enough to miss Miss Claudette. In a perfect world, this would be an animated movie as well, or better yet, a cartoon show, like the new Rapunzel TV series… just, with more monsters and such.

In this sequel, Claudette and her friends and family have to fight dragons, among other creatures. There’s an evil wizard (that everyone totally worships without even knowing) roaming the unpaved streets and Claudette’s father is going on a mission to recuperate his lost sword to defeat him… from the belly of the great dragon Azra. As always, he refuses Claudette’s help. Like that’s going to hold her back.

If there’s one thing Claudette loves, it’s an adventure. If there’s one thing *I* love, it’s strong female leads who do whatever they want and kick ass every which way. Claudette’s friend Marie and brother Gaston, however, are not so happy about getting back on the field after their last misadventures.

Just like the previous book, it’s fast, action-filled, humorous, and full of heart. There is an extra, unnecessary amount of dialog that could have been cut to get us to the point a bit faster, but I’m quite appreciative of this series and how appealing it is to both children and adults, boys and girls. Isn’t the 21st century amazing? I mean, I couldn’t imagine a series such as this one being published in the 1950s. Give it a shot, you won’t regret it.

One thought on “Dragons Beware! (Chronicles of Claudette, #2)”