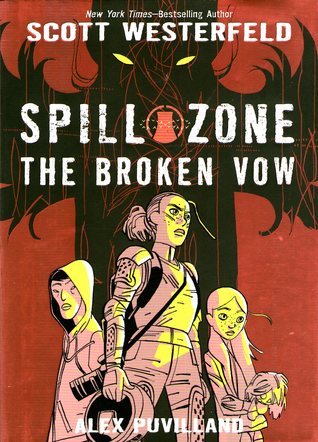 The Broken Vow by Scott Westerfeld

Only the very brave or the very desperate dare enter the Spill Zone—Addison Merritt is a little of both. In exchange for a suitcase full of cash, she made one last to the Zone. She survived the encounter, but came back changed. Addison is not alone. In a remote village in North Korea, a young man named Jae was touched by the unholy fire of the Spill Zone. He made it out alive—alive, but also changed. Now bestowed with uncanny powers, Addison and Jae may be the only ones strong enough to face a new threat that has risen in the Spill Zone. This deadly entity is searching for his runaway bride—and his hunt is bringing him closer and closer to Addison and her little sister.

You know when an author is building up this exciting suspense around a topic or certain aspect of a story, like a location, character, or any other element?

And so you read on, really interested and making up your own theories in your mind. But then when the time comes to reveal what has been concealed in the past, it just… doesn’t blow you away. Or maybe it doesn’t even add up.

I thought this was supposed to be a young adult story. I even praised how serious it was in the past, and how it made me believe in the direness of the situation. But the revelation is so… juvenile. And dull. Were we really expected to fall off our chairs?

Well, I didn’t… It’s a joke. It’s ridiculous. If I, a girl, reacted this way (and I usually don’t mind romance stuff), I wonder how a boy reading this will. He’d probably be like, ‘‘WTH,’’ like I was.

The rest is fine. The story is interesting and the characters as well. I especially enjoyed the interactions between Addie and Jae – it was about time they met! The pacing is still fast and we did, fortunately, get answers. It’s just that those answers weren’t worth being excited about.*

I thought this would be the last volume – a duology – but the ending (aka cliff-hanger) proved otherwise. I’m not yet sure if I’ll be checking out the next book, because I’ve lost my excitement about the otherworldly elements, but it’s not a definitive no either.

*HA, I just realized that part of the revelation is in the synopsis (which I hadn’t read). Well.