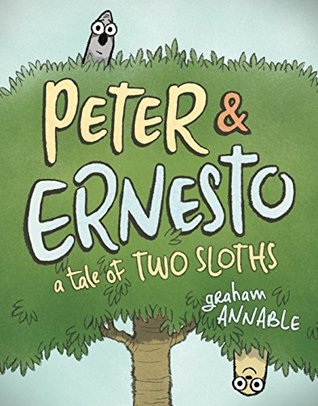 Peter & Ernesto: A Tale of Two Sloths by Graham Annable

Peter and Ernesto are two sloths that lead a pretty calm life. They enjoy spending time together and entertain themselves by playing little games with one another, like finding shapes in the clouds.

However, one day, Ernesto becomes restless. He wants to do more than look at the sky. He wants to go there! He wants adventure, to see the world, all of it. Peter, on the other hand, is quite fearful of the unknown, so not so eager to join his friend. But he cannot stand being left behind, alone, without his friend by his sides to sing with him. So he follows behind. Interestingly enough, although both sloths seem to be going in the same direction – though separately – they experience their personal journeys differently.

This is a humorous story of friendship, adventure and exploration. I read it rather fast, in five minutes really, but those were some memorable five minutes. The illustrations are lovely (I can’t resist pastel colours!) and the two main characters so very charming. Although I spent little time with them, I did get a good sense of their personalities and am looking forward to seeing more of them in the future.