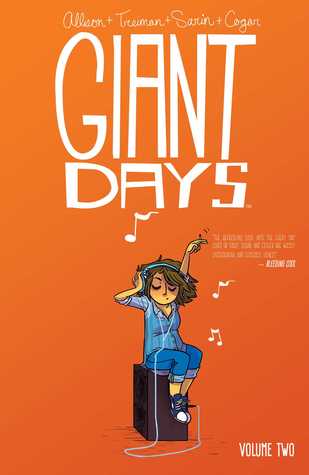 Continuing their first semester at university, fast friends Susan, Esther, and Daisy want to find their footing in life. But in the face of hand-wringing boys, holiday balls, hometown rivals, and the willful, unwanted intrusion of “academia,” they may be lucky just to make it to spring alive.

This volume is proof that you shouldn’t always judge a series by its first book, perhaps especially when it comes to comics, which usually have many volumes.

See, the first comic in this Giant Days series was alright. It was entertaining, interesting and colourful. I wasn’t crazy about the characters, because little back-story was given, but I did appreciate the girls’ three-dimensionality and distinct personalities.

I did not, however, have a favourite heroine. The three girlfriends were ‘‘alright,’’ but I couldn’t imagine myself being part of their crew at any point.

After reading this second volume, though, and getting to know Esther, Susan and Daisy better, I’m starting to feel quite connected to them and even see myself in the three different girls. Daisy is the innocent one. Susan the careful one. And Esther the risk-taker. The ‘‘let’s wing it’’ one.

Esther and I may be complete opposites. For instance, I would never forget to study for an exam, for fear of failing the class. Plus I would never wear the sort of clothes she does or be so comfortable around guys, but somehow she’s the one that I found myself being most interested in reading about.

Maybe exactly because of all of these things we don’t have in common. I felt like she had a lot to teach me about living life at its fullest and enjoying oneself in so many ways. She’s a drama queens, yes, and she still herself has much to learn about the world, but she’s learning… slowly… and with her two best friends by her side to help her navigate all that she doesn’t understand – like university courses – she’s sure to be heading in the right direction. Eventually.

I’m satisfied with this sequel and can’t wait to read more! Thank goodness I have the other books in the series with me. Thank you, Diamond Comics. :)