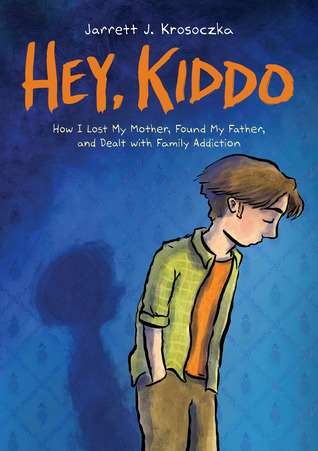 In kindergarten, Jarrett Krosoczka’s teacher asks him to draw his family, with a mommy and a daddy. But Jarrett’s family is much more complicated than that. His mom is an addict, in and out of rehab, and in and out of Jarrett’s life. His father is a mystery — Jarrett doesn’t know where to find him, or even what his name is. Jarrett lives with his grandparents — two very loud, very loving, very opinionated people who had thought they were through with raising children until Jarrett came along. Jarrett goes through his childhood trying to make his non-normal life as normal as possible, finding a way to express himself through drawing even as so little is being said to him about what’s going on. Only as a teenager can Jarrett begin to piece together the truth of his family, reckoning with his mother and tracking down his father.

I only realized I have read this author before (five times, actually) when I read the author’s note and realized that he’s the creator of Lunch Lady.

No wonder I didn’t figure it out. This is not humorous, or light, or action-packed like Lunch Lady is.

Because this is a memoir—the author’s. And a very honest one at that. It’s never easy to share your truth with the world, because what if your words are not well-received, what if you’re judged, what if you didn’t carry your message across?

But it’s still important you try. I’m glad this author tried, despite his initial reluctance. He mentioned becoming motivated to create this graphic novel after giving a TED talk and receiving an overwhelmingly positive response, and I’m so glad he did.

In this book, we follow Jarrett from childhood to adolescence to graduating high school. We see him interact with his mother, who was a heroin addict, his grandparents, who raised him after witnesses their daughter’s decline into darkness, and later on his father.

It’s not an easy story to read, definitely darker than most YA graphic memoirs that get published. Actually, graphic memoirs to begin with aren’t very popular, but those that I have read were nothing like this.

I’m not trying to say it’s a depressive story. On the contrary, it is hopeful, family-focused, and will motivate you to do everything possible to accomplish your own dreams. But the child neglect, of course, affected me.

The author wrote this book in hope that readers will be able to understand and perhaps connect. I say he has achieved his goal. I can’t wait for this book to come out and see it skyrocket to NYT bestselling status.