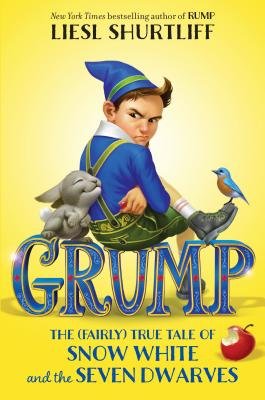 Grump: The (Fairly) True Tale of Snow White and the Seven Dwarves by Liesl Shurtliff

Ever since he was a dwarfling, Borlen (nicknamed “Grump”) has dreamed of visiting The Surface, so when opportunity knocks, he leaves his cavern home behind. At first, life aboveground is a dream come true. Queen Elfrieda Veronika Ingrid Lenore (E.V.I.L.) is the best friend Grump always wanted, feeding him all the rubies he can eat and allowing him to rule at her side in exchange for magic and information. But as time goes on, Grump starts to suspect that Queen E.V.I.L. may not be as nice as she seems. . . . When the queen commands him to carry out a horrible task against her stepdaughter Snow White, Grump is in over his head. He’s bound by magic to help the queen, but also to protect Snow White. As if that wasn’t stressful enough, the queen keeps bugging him for updates through her magic mirror! He’ll have to dig deep to find a way out of this pickle, and that’s enough to make any dwarf Grumpy indeed.

That’s right. This is a fairytale retelling of Snow White, from the point of view of one of her seven dwarves, Grump.

Grump is not in the story for observation purposes only. He also acts. He plays a grand role in Snow White’s tale—that starts out as his own, before mixing his fate with hers.

This is my third book from this author, but while I highly enjoyed Grump, I disliked Red, so I was hesitant to read it, despite the cinematic cover. Animated movie vibes, anyone?

But I was pleasantly surprised from the beginning. Ms. Shurtliff is smart. She created an interesting world-building in which dwarves live underground, eat precious stones to survive, and don’t have contact with humans because of the negative past experiences with them.

The story is fairly engaging. (Ha!) Unlike the majority of fairytale retellings out there, this one is not so predictable. There are, of course, the main events that are included in all Snow White tales but, for the most part, you’re able to experience the story without predicting future scenes.

I would have given it a higher rating, truly, but I realized halfway through – when Snow White became much more present – that the characters have similar personalities, from the dwarf, to the Evil Queen, to Snow White herself. And childish, rather, but perhaps that’s unfair of me since this is a middle grade book.

So while the storyline had me by the arm, and the writing gently nudged me into reading more and more, the characters had no idea how to win my heart. They were being themselves, but how can a queen, a princess and a dwarf have such similar demeanours?