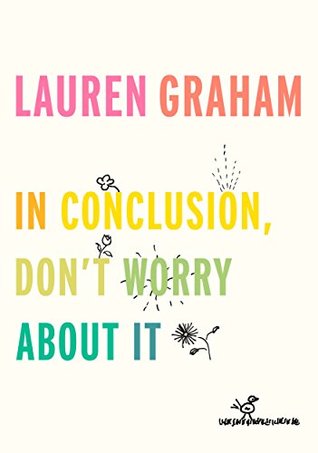 In Conclusion, Don’t Worry About It by Lauren Graham

Advice for graduates and reflections on staying true to yourself from the beloved Gilmore Girls actress and New York Times bestselling author of the memoir Talking as Fast as I Can and the novel Someday, Someday, Maybe.

Everything Lauren Graham says in this short book is worth pondering.

Dear reader, you have no idea how much your opinion affects me. If I don’t get a positive enough response on a review, I’m going to immediately assume that I said something weird that people can’t understand or connect with.

Lauren Graham says not to worry too much, and that’s easier said than done, but it’s also very true. The moment I stop caring about likes and comments, I’m going to be twice the reviewer that I am today. At the same time, I can’t not care about your responses, because you, the reader, matter to me, and I don’t want to forget you completely.

Another intelligent thing that Ms. Graham says is to make The Most of what you have so, basically, to live in the moment. It’s great if you want to become a movie star or a CEO, but it’s also great if you’re not there yet. Wherever you are on your path, don’t forget that what matters most is not what you have or how famous you are, but what is deep inside of you.

I agree with that completely. I have big dreams that often appear too big even for someone like me who is willing to take leaps of faith and shoot for the stars. I’m not even close to where I want to be, but I’m getting there, and even if there are things I want to do today that I’m unable to, I never forget that I will only achieve my goals if I remain the honest person that I am today.

Just a few hours ago, I went to the mall to buy a monthly bus pass, and after that I went to Walmart to treat myself to some cheap chocolate (YUM!). When I got in line to pay for the stuff, there was a girl in front of me. She tried paying for the two pairs of shoes she picked, but her card was declined. Eventually, she removed one pair, and used her card. It was fine, but she still had about twenty dollars left to give the cashier. She only had fifteen dollars in her hands.

I wasn’t annoyed. ‘‘It happens,’’ I told the girl. I was in no hurry whatsoever. But I stepped in. I told her and the cashier that I’d pay the difference. Who cares, it’s just a few dollars, but you should have seen the girl’s face. It’s like I just saved her life or something. Then she admitted she needed the shoes for work the next day. I didn’t know, I only stepped in because it seemed like the right thing to do. She had no idea how to thank me, so I became a bit uncomfortable. And what does Lola do when she gets uncomfortable? She hugs people. Yes, we hugged, and the cashier was like, ‘‘Awww,’’ and then, when I paid my cheap chocolate, she said, ‘‘That was really nice what you did there.’’

Anyway, all that to say that I am okay with being at the point in my life where I am now, because it’s these little moments of human interaction that make me happy and remind me that we were put into this world to, yes, work hard and get results, but also to be kind to each other and hug random people. Ha. Ha. Ha.

Lovely speech Lauren Graham wrote. Well-written and engaging. She mostly talks in a general way, using only a few developed examples in total, the other ones being quite brief, which is why I can’t give it more. Most of what she says has already been said before, just a tiny bit differently. Regardless, it is motivational, and so, recommended.

One thought on “In Conclusion, Don’t Worry About It – Lauren Graham”