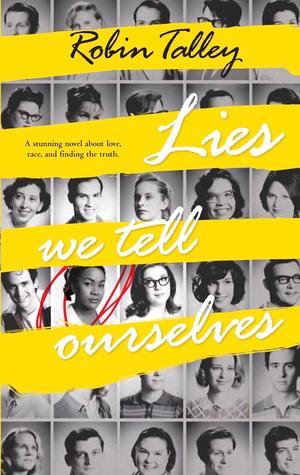 Lies We Tell Ourselves by Robin Talley

In 1959 Virginia, the lives of two girls on opposite sides of the battle for civil rights will be changed forever. Sarah Dunbar is one of the first black students to attend the previously all-white Jefferson High School. An honors student at her old school, she is put into remedial classes, spit on and tormented daily. Linda Hairston is the daughter of one of the town’s most vocal opponents of school integration. She has been taught all her life that the races should be kept separate but equal. Forced to work together on a school project, Sarah and Linda must confront harsh truths about race, power and how they really feel about one another.

‘‘Other people will always try to decide things for you,’’ she says. ‘‘They’ll try to tell you who you are. Remember, no matter what they say, you’re the one who really decides.’’

Don’t ever forget this picture. 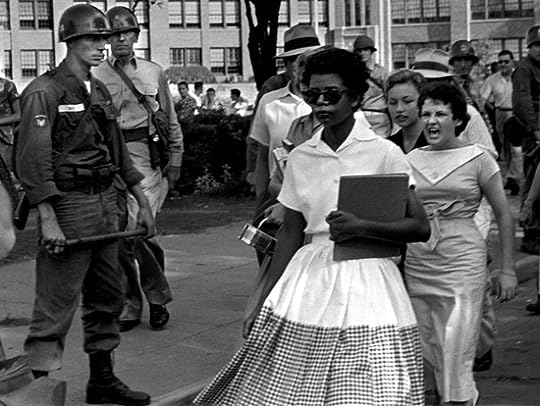 It is photojournalistic proof that people of colour have suffered to have their rights recognized, and that if today they are allowed to learn next to white people worldwide, it is because they have endured and struggled and fought.

Look at those policemen doing nothing. Look at the hate in the white woman’s face. Look at the admirable black woman in the front who is keeping it together. Strength is beautiful.

As is this book.

You should know that Historical Fiction is one of my least favourite genres, and I avoid it as much as possible.

So the way I see it, the fact that I read this in less than a day and thoroughly enjoyed it speaks volumes.

I read it extremely fast because I was captivated. I learned about integration and desegregation in some of my previous History and Humanities classes, and I honestly thought I knew enough about it to introduce the topic to someone else.

I knew close to nothing.

It is clear that the author did much research before writing this novel from the amount of authentic information that she managed to include.

For example, I didn’t think that any of the coloured students that integrated the white schools would be forced to drop out by the white students who terrorized them, and I definitely didn’t know that this could set the movement back.

Most of the time, though, I felt more anger than surprise, like when adults did nothing when they witnessed a black kid being treated unfairly and even attacked so hard to the point of losing conscience. How can a human being watch something like that and not act?

Even if there is a love story of a sort, one that is quite sweet all things considered, it is never heavy on the romance per se. The focuses of the story are really the integration part and the ways in which people—both white and coloured—react to it. Mostly negatively, but there is unexpected kindness, too.

Linda’s characterization isn’t as well done as Sarah’s, seeing that some of her reactions to the hate she sees around her appear forced, but that doesn’t mean that she isn’t a wonderful character to read about and one we absolutely needed in such a story. Sarah is perfectly-developed and impossible to dislike.

What a compelling first novel. I’m happy this educational historical fiction was written, because we mustn’t forget the past.