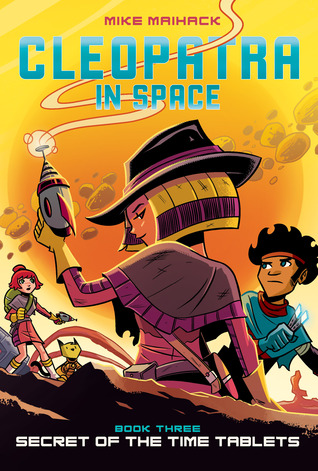 Secret of the Time Tablets by Mike Maihack

Cleo and her friends journey from Yasiro Academy to the city of Hykosis, where some of the most notorious thieves and assassins live. They’re in search of information about the time tablets that could determine Cleo’s fate – whether she wants them to or not. But the group is separated when Xaius Octavian’s fleet attacks their ship, and Cleo and Akila are on their own until they run into an old nemesis. Will Cleo find the information she needs and get out of Hykosis alive?

It’s always a pleasure to be following Cleo’s adventures.

She is living an exciting but dangerous life. She knows she’s the chosen one, and she knows what she’s supposed to do, but she’s not ready to save the world yet.

However, the more she learns about this new galactic world she’s living in, and more she opens herself to her surroundings, the more she grows as a person and understands what is expected of her and how she shall proceed to save the people she has began to care a lot about.

This particular volume is very revealing. This is only the third volume of the series, and I’m not sure how many books this series will comprise, so I was definitely surprised to be learning so much from this sequel. The author does not disappoint at all.

And because the characters are more open than ever with one another, and the reader is revealed different secrets, I had a blast reading it. The illustrations certainly aren’t bad to look at either.

I cannot wait to dive into the next one, as always, and I’m really hoping there will be at least five more books in the future.