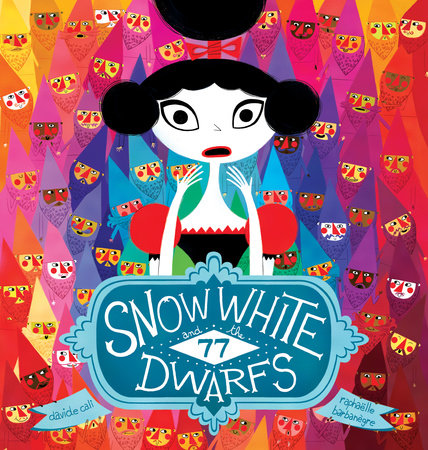 Snow White and the 77 Dwarfs by Davide Cali

Snow White is on the run from an evil witch when she comes across some dwarfs in the forest. They agree to take her in and keep her safe if she will help them with their chores. She soon realizes she’s taking on a lot more than she bargained for. 77 breakfasts to make, 77 lunches to pack (don’t forget the juice boxes!), 77 pairs of pants to mend and a whole lot of dishes. Eventually Snow White decides to take her chances with the witch. There’s a surprise ending… well, it may not be so surprising. This is a hilarious retelling of the classic tale, with bright, energetic illustrations featuring busy dwarfs, and the even busier Snow White.

This one made me laugh.

It goes as the original Snow White tale does… but instead of meeting seven cute and polite(ish) little dwarfs, she is greeted by seventy-seven ones that take advantage of Snow White in every way possible, making her perform household duties—one after another, non-stop.

She doesn’t have a moment for herself. I felt for her, and when she asked for help, I sure as hell expected the dwarfs to at least try to be better roommates.

That just won’t do. Snow White thinks so as well, so she turns her back to the tiny people that have such big expectations and returns to the negatively portrayed powerful woman (aka The Evil Queen) that, as one would argue, forced her into this situation in the first place.

You know what, at least The Evil Queen never exhausted her and drained her life from her slowly as the dwarfs have no problem doing.

This is a story that you should not be taking seriously. I know that when I read Little Red Riding Hood, I’m reminded that kids should never talk to strangers and follow them anywhere, but this is really a tale to make you smile and laugh and just brighten your day.

Enough is enough—that is the message of this book. A good one, shall I add, and the ending is open enough for you to imagine your own final scene or, if not, accept it as it is.