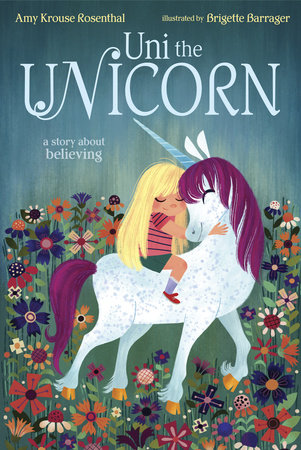 In this clever twist on the age-old belief that there’s no such thing as unicorns, Uni the unicorn is told there’s no such thing as little girls! No matter what the grown-up unicorns say, Uni believes that little girls are real. Somewhere there must be a smart, strong, wonderful, magical little girl waiting to be best friends. In fact, far away (but not too far), a real little girl believes there is a unicorn waiting for her. This refreshing and sweet story of friendship reminds believers and nonbelievers alike that sometimes wishes really can come true.

Well this was unexpected. I mean that in the best possible way.

But there’s something missing. She believes there is someone out there—a human girl—waiting for her to become best friends. That is her wish. Perhaps her life will be complete once she meets the little girl.

Little did she know, there is indeed a little girl, who believes in unicorns, just waiting to meet her first unicorn friend.

Uni reminded me of the majestic Marigold from the graphic novel series PHOEBE AND HER UNICORN (aka HEAVENLY NOSTRILS)… who is also in love with her own beautifulness. If you enjoyed that series, you will love this picture book. It is wonderfully-illustrated and pretty charming.

The message is the following: it’s important to believe, even if you don’t have proof that what you believe in exists. You never know when your dreams will become reality, but one thing is certain: if you don’t keep on believing, they just… might… never.