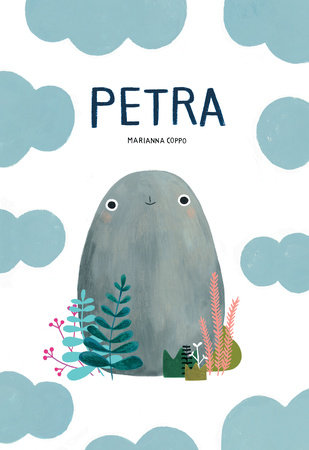 Petra is a little rock who believes she is a mighty mountain . . . until a dog fetches her for its owner, and she is tossed into a bird’s nest. A mountain? No, Petra is now an egg! An egg of the world in a world of possibility. Until she’s flung into a pond, and becomes an amazing island . . . and, eventually, a little girl’s pet rock. What will she be tomorrow? Who knows? But she’s a rock, and this is how she rolls!

Petra is a rock. But she personally thinks she’s a mountain.

Except, when a dog manages to uproot Petra, who thought she was unmoveable, she starts to realize that the definition she is given depends upon where she is in time and place, and that she can be so much more than she first thought. Limitless.

This story is fairly simple and straight-forward. Its depth does not rely upon the number of words or illustrations included. Actually, the less the author said, the more the reader understood. It made me realize that, indeed, rocks are more than they appear to be.

To spiders, they can be homes. To ants, they can be islands. To us, they can be artworks or pebbles to entertain ourselves with. Even the smallest and less lavish of nature’s elements fits into this world in limitless ways.

PETRA is a smart book that will inspire children to think outside of the box. I don’t see why anyone should pass up on this one.