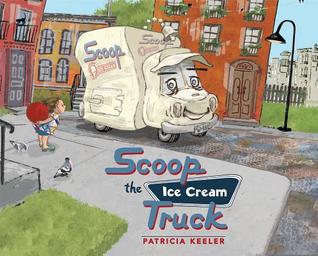 Scoop the Ice Cream Truck has seen a lot of summers selling his vanilla ice cream cones across the city. But he’s getting old, and the new trucks are getting fancier. Now they have waffle cones, jumbo sundaes, flash frozen ice cream, twenty-seven flavors and six special toppings. Feeling like he’s fallen behind, Scoop decides that it’s time for a redesign. But when his old frame can’t handle the new upgrades, can Scoop discover his own value and find the right spot to sell his vanilla cones?

Er, what was that?

It’s about an ice cream truck named Scoop that loves to give ice cream. Except, there are many new shiny ice cream trucks around the block that offer various flavours and suddenly people aren’t so interested in Scoop anymore.

He meets a little girl who keeps wanting to play with him… but that doesn’t really help him get customers. He then decides to change himself—to improve his truck and flavours—so he can have customers again.

That doesn’t work either so he finally decides to retire to the mountains where he wanted to be in the first place. It’s weird and I’m not sure I like the message. It’s like saying someone who works at a company is suddenly too old to work there anymore since everyone understands social media except for them. I don’t know about you, but I would have wanted Scoop to find a way to make it work, not to give up, even if he’s happy where he is as he quite enjoyed spreading the love of ice scream.

At the same time, it’s good to know when you need to retire and at least he did it by his own volition. But I don’t like the illustrations either. They are awkward and appear unfinished. Not at all my style. I don’t remember the last time I gave a one-star-rating to a picture book but here I am… Oh well. *shrugs*