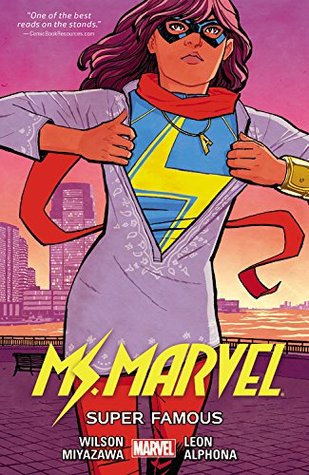 She’s your new favorite. She’s everyone’s new favorite. And now she’s joining the big leagues. Look out world, Kamala Khan is officially an Avenger! But will being one of Earth’s Mightiest Heroes be everything she imagined? Or is life as a celebrity harder than she thought? But while saving the world is important, Jersey City still needs its protector too. A development company that co-opted Ms. Marvel’s face for its project might well have more in mind for gentrification than just real estate. Can Kamala take down the evil suits destroying her home without ruining her personal life? Speaking of which, who exactly is that with Bruno? Get back on board and cling on, Kamala Korps, the ride is about to get wilder than ever!

Ms. Marvel is now an Avenger. She has the phone number of Iron Man, yes she does.

Except she doesn’t feel like she is totally part of the Avenger team, because she’s still a teenager and doesn’t have the time nor experience the Avengers—whose main job is to fight criminals—do.

She needs to figure out how to have a balanced life so that she doesn’t miss out on her teenage years but is able to be Ms. Marvel when necessary anyway.

This volume is divided in two parts. In the first part, Ms. Marvel’s image is borrowed without her permission by a villain, which leads to the population of New Jersey starting to doubt the intentions of Ms. Marvel and whether she belongs in New Jersey to begin with.

In the second part, Ms. Marvel plays with fire—figuratively, for once—and ends up burned. However, this mistake makes Kamala realize some things about her life that would have otherwise remained in the dark of her mind.

As always, we are introduced to new characters—one of them being Bruno’s new girlfriend. I have to say, I was never really a fan of Bruno. He’s a great friend and he’s nice enough, but I never thought of him as sexy boyfriend material. But seeing him with his new girlfriend made me reconsider that aspect.

And now I’m wondering: Do I want him and Kamala to happen? I don’t know anymore. I didn’t before and he seems happy now. MUST read more.