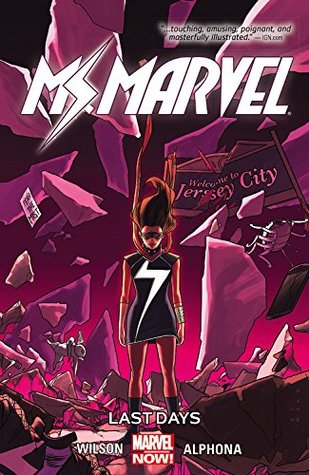 From the moment Kamala put on her costume, she’s been challenged. But nothing has prepared her for this: the last days of the Marvel Universe. Lucky she’s got the help of Carol “Captain Marvel” Danvers! Between teaming up with her personal hero to rescue her brother and trying to keep her city from falling into an all-out frenzy, Kamala has barely had time to come to terms with the fact that the world is literally collapsing around her. But the truth will catch up to her, and soon. When the world is about to end, do you still keep fighting? Kamala knows the answer. Let’s do this, Jersey City.

Will Ms. Marvel be able to save everyone in the city, including her loved ones? Another hero makes its appearance in this volume – someone who is on Ms. Marvel’s side and offers her own strength to help the people of Jersey City.

This was… dark. In the previous volumes there was humour even during dire situations, but in this one the atmosphere is almost entirely serious. There is no time to laugh or slack. After all, it might just be the end of Kamala’s city… And it might just be up to her to make sure that’s not the case.

Like the previous volume, this is a short one because Marvel included two issues from the Amazing Spider-Man comic. I have to say, I’m not sure I like this new tendency to include unrelated issues from other series. Well, not one hundred percent unrelated, seeing that Ms. Marvel is indeed featured, but it’s not related to the story we’re reading now.

I have no idea what will happen next. Some of my questions were answered… but now I have a dozen new ones. Will that ever end? Probably not… Not complaining, though.