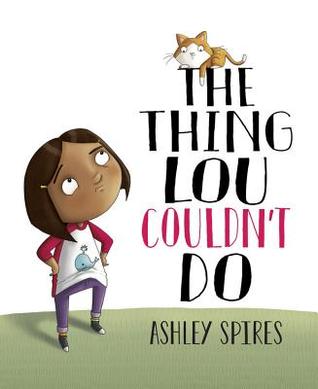 The Thing Lou Couldn’t Do by Ashley Spires

Lou and her friends are BRAVE adventurers. They run FASTER than airplanes. They build MIGHTY fortresses. They rescue WILD animals. But one day, when they re looking for a ship to play pirates in, Lou s friend has an idea: Up there! The tree can be our ship! Ummm … says Lou. This is something new. Lou has never climbed a tree before, and she s sure she can t do it. So she tries to convince her friends to play a not-up-a-tree game. When that doesn’t work, she comes up with reasons for not joining them her arm is sore, her cat needs a walk, you shouldn’t climb so soon after eating. Finally, she tells herself she doesn’t want to climb the tree. But is that true, or is this brave adventurer just too afraid to try?

Here’s the truth: I never climbed a tree in my entire life. Well, first, I never felt the need to and I was never excited by the idea.

But mostly, I had no clue how to even do such a thing and didn’t want to get hurt. Just like Lou. She may be adventurous and love action, but she still is human and humans have their strengths and weaknesses.

So Lou has to admit to herself and to her friends, who can all climb trees like they were born Tarzan, that she is afraid and lacks physical strength. It’s not easy to open up to others about things we might be ashamed of or embarrassed about, so this is a teaching moment for Lou.

I adored this little story. Not that I condone kids climbing trees, since obviously it can be dangerous and I wouldn’t want anyone to get hurt, but I read the story as a metaphor more than anything else.

And can I mention how delightful it is to read a picture book with a dark-skinned main character? Let’s face it, there aren’t many out there unfortunately.