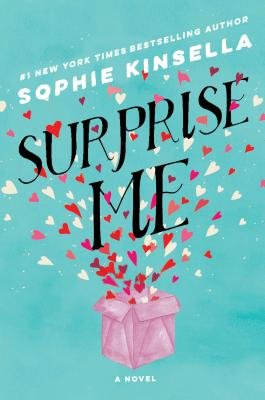 Surprise Me by Sophie Kinsella

After being together for ten years, Sylvie and Dan have all the trimmings of a happy life and marriage; they have a comfortable home, fulfilling jobs, beautiful twin girls, and communicate so seamlessly, they finish each other’s sentences. However, a trip to the doctor projects they will live another 68 years together and panic sets in. They never expected “until death do us part” to mean seven decades In the name of marriage survival, they quickly concoct a plan to keep their relationship fresh and exciting: they will create little surprises for each other so that their (extended) years together will never become boring. But in their pursuit to execute Project Surprise Me, mishaps arise and secrets are uncovered that start to threaten the very foundation of their unshakable bond. When a scandal from the past is revealed that question some important untold truths, they begin to wonder if they ever really knew each other after all.

Well this is a surprising book. Pun very much intended.

I feel like if this is your first ever Sophie Kinsella read, you should pick another one of her stories. I would point you towards her Confessions of a Shopaholic series first so you become acquainted with her humour and style.

Because this book is crazy even to fans of Sophie Kinsella, so I can’t begin to imagine what people who know nothing about this author will think. The concept isn’t, however, crazy at all. It’s actually smart.

Sylvie and Dan, who have been together for ten years, learn that they will have another sixty-eight years together. This freaks them out because they worry they will bore each other to death and lose the magic that exists between them today.

So they come up with a rich people’s solution: surprise each other every day to keep the magic alive. I say ‘‘rich people’s solution’’ since what happens is that they mostly just buy stuff for each other. Hey, they can afford it. Surprises don’t have to be about material new objects/pets, but well Sylvie and Dan have a skewed understanding of what beautiful surprises are.

And yet, I did like the surprises. Sophie Kinsella didn’t exactly catch me unawares by writing this book. She always did like to try new things and explore different humorous situations. I adore the way she manages to shift tones from serious to light. Her books entertain but they also make you feel contemplative about the world around you and your own life.

This is not her best work, I’ll admit. Certain chapters are way too silly and exaggerated, plus I never was able to connect to Dan, but Sylvie is a character I enjoyed reading about. She’s not so different from the author’s previous heroines, and again, I really do recommend it to those who are already familiar with Ms. Kinsella.

One thought on “Surprise Me – Sophie Kinsella”