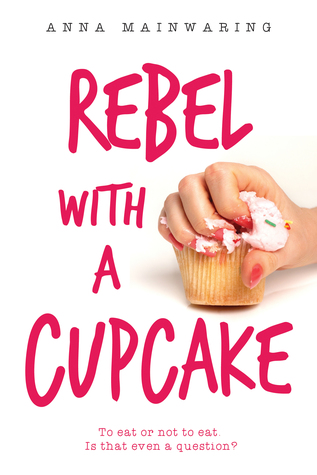 Rebel with a Cupcake by Anna Mainwaring

Jesobel Jones is bold and brash, the daughter of a hand model and a washed-up rock star. Jess sees no need to apologize for her rambling house, her imperfect family, her single status … or her weight. Jess is who she is. She makes her own cupcakes and she eats them, too. No regrets. That is, until Own Clothes Day rolls around at school. Jess and her friends dedicate the requisite hours of planning to their outfits, their hair and their makeup for the one day they are free from school uniforms. But a wardrobe malfunction leaves Jess with a pair of leggings split open at the worst spot, and a mean girl calling her the one thing that’s never bothered her before: fat. The encounter shakes Jess’s formerly iron-clad confidence, and she starts to wonder if she’s been just a little too comfortable in her own skin. When the boy of her dreams invites her to a party, she must decide whether to try to fit in for the first time in her life, or remain true to herself — whoever that really is.

I, for one, could not get enough of Jesobel’s clever and sassy remarks. You know what would have been great? If this were a long series with journal entries from Jesobel about everything and anything.

Because when this girl discusses a topic, she does it well. So much that I ended up being disappointed some subjects—like college—were not brought up. She reminded me of Loni Love from The Real Daytime.

But although Jesobel is impressively insightful and entertaining, truthfully, she is not omniscient. She doesn’t know everything, so she does, yes she does, make mistakes. And that is alright. She is a teenager—she is supposed to fall on her face many times over. As long as she gets up afterward, that is.

The story, however… meh. There isn’t much to tell. Mostly, Jesobel has a crush on a guy that is supposedly out of her league, but when she notices interest in his eyes, she musters her courage and confidence and goes for it. It’s a teaching moment for her, especially since her love interest is unclear about his intentions.

You see, there is nothing original about the storyline. I’m sure you can all say that you’ve been there, read that. So, as mentioned, it’s really about the interactions between the characters themselves, the fabulous Jesobel, as well as the feminist and body positive themes.