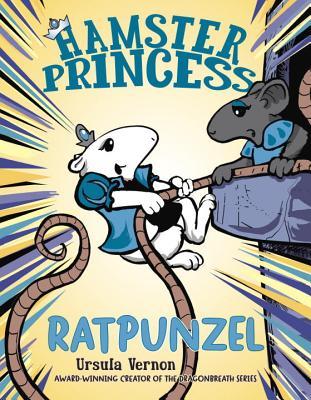 Princess Harriet Hamsterbone does not like sitting around at home. How’s a princess supposed to have any fun when her parents are constantly reminding her to be careful and act princessly? So when her pal Prince Wilbur needs help finding a stolen hydra egg, Harriet happily takes up the quest.  The thief’s trail leads them to a wicked witch and a tall tower, occupied by a rat whose tail has more than meets the eye!

I’m actually a little jealous of the people in this story, because they get to see more of Harriet’s quests than the carefully selected ones we, the readers, do.

In this sequel, Wilbur’s friend’s egg has disappeared, and so, he and Harriet—as well as their own personal sidekicks—pay a visit to Gothel who may know what has happened to it.

While this is a retelling of Rapunzel, it’s not that far from the Disney story, surprisingly. Yes, the princess is a rat and she has a longer tail as opposed to longer hair, but her personality is similar to that of the Rapunzel we know—and so is Gothel’s. So these two characters did not surprise me exactly.

But it’s what’s around (and inside) the tower that is interesting—By that I mean the other elements, since the main events are familiar—such as the altered trees and the affair of the tears.

I noticed the illustrations here were more detailed—showing more of the world—than in the previous books. Great job!