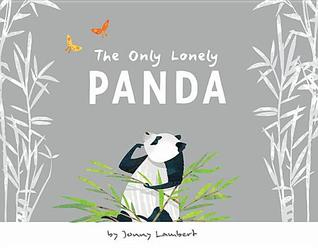 The Only Lonely Panda by Jonny Lambert

Panda is lonely. One day, he sees another panda and wants to make friends, but he doesn’t know how to do it. He watches the flamingos make friends by dancing together, so he tries dancing-but that doesn’t work. Then he sees lemurs bouncing and leaping together, so he tries bouncing and leaping-that doesn’t work, either. Will he ever figure out a way to make a friend?

This picture book made me smile so hard.

It’s about a panda who really wants to make a friend, since he’s quite lonely, but unfortunately, he has no idea how. To get some inspiration, he observes other animals in his environment and notices the techniques they use to make their own friends.

He decides to replicate these techniques, but fails miserably. Little did he know, he only had to be his own amazing self to make a friend.

I adored how he succeeded in making a friend when he actually wasn’t even trying. I think you can definitely choose your friends—like Panda here did—but you can’t force them to like you. And you also shouldn’t try to be someone you’re not—like Panda here did—because they have to see the real you.

Jonny Lambert’s graphics are gorgeous. If he hasn’t already, he should really consider making a short film or something of the like. They are perfect for children who love colors and motifs. Well done!

One thought on “The Only Lonely Panda – Jonny Lambert”