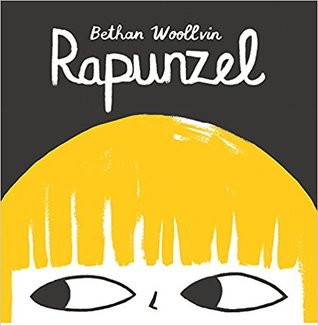 The wicked witch has Rapunzel trapped – but not for long!  Rapunzel lives all alone in a tall, dark tower. Under the threat of a witch’s fearsome curse, the poor girl seems doomed to a life in captivity. But is Rapunzel frightened? Oh no, not she!

This is a feminist retelling of Rapunzel for children.

You have no idea how many times retellings have made me wince. I strongly believe in men being chivalrous, but I also believe princesses that are always being rescued by princes sends the wrong message to kids nowadays. Girls can take matters in their own hands too.

So I adored how this Rapunzel rescued herself. Not only that, but there is no mention of a prince or boy. The friend she makes is an animal… She finds clever ways of defeating the witch by herself and doesn’t let fear invade her thoughts.

As for the illustrations, they might be in three colours and simplistic enough, but they are very effective. They show us what needs to be shown and really make us feel part of the story. Even if Rapunzel rarely speaks in the story, her actions are enough.

Retellings are important because times change. Let girls see that they can solve problems by themselves.