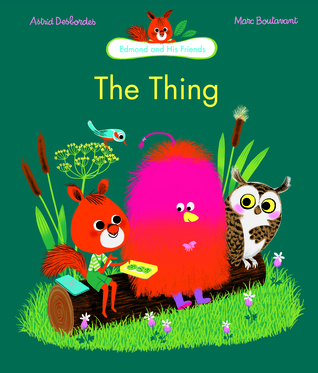 Edmond: The Thing by Astrid Desbordes

This is the story of Edmond, a squirrel, and George, an owl, who one day discover a creature they’re unfamiliar with and call it the Thing. Because this is such a strange and unknown creature to them, they become scared.

This fear pushes Edmond and George to flee and later George puts up a sign forbidding the Thing from trespassing. The sign made me feel really bad for the Thing and I’m actually a little disappointed the authors included that passage since it’s such a sudden and extreme action.

Not to mention unsurprising. But it does do the trick. As I said, it made me feel bad and that’s the right reaction. Any kid reading this will easily realize that what Edmond is doing is wrong and that his emotions cloud his judgment.

I understand why the authors made the Thing look so fluffy and sweet. After all, the reason why it will be so easy for kids to frown upon Edmond’s actions is because of the fact that the Thing looks adorable and amiable. If it had looked horrendous, it would have been harder for the reader to accept the unknown. They would have needed more convincing. In this case, it’s obvious who is in the wrong.

Cute, effective and straightforward. I found especially adorable how Edmond and George first believed the cookies would give them courage.