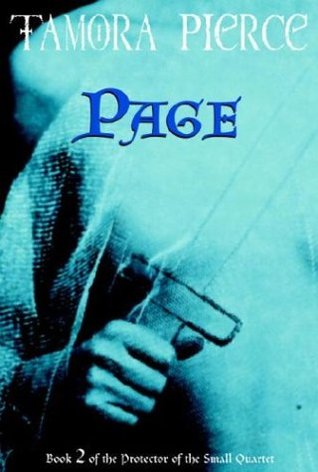 Kel fights to maintain the rigorous regimen of a page while confronting the prejudices that come with being a female in a man’s world and coping with a crush on her closest friend, Neal.

Keladry is now a page. Although she is not on probation anymore, she still has to prove herself to her training master, teachers, peers and the king himself, seeing that unfortunately women do not become knights in Keladry’s world, with the Lioness as the only exception so far.

But Keladry knows she can do it if she never loses sight of her goal and puts her mind and body to it. The training is rough, but she excels because she practices and perseveres. Sadly, her strength arouses jealousy in other classmates and her gender offends non-progressive men. These same men try everything in their power to ruin Keladry’s chances at stepping up. Fortunately, she has friends by her side, one of them being her new maid, Lalasa.

While I enjoyed this one a little less than the first book, Tamora Pierce is so skilled with a pen (or keyboard?) that I simply found pleasure in reading about Keladry’s new adventures and misadventures. In this sequel, she is growing not only mentally and physically but also in age. We follow her as she trains for almost three years. I liked that part, but surprisingly, in spite of the fact that the timeline was so long, I felt as though little of much importance happened. The storyline is filled with small events and only two or three main ones.

Even if this series is not a trilogy, I could compare PAGE with many second books, also known as middle books, that are part of a trilogy. It’s still an essential sequel, seeing that Keladry learns what it means to be a girl and care for someone other than herself, but not one to which I could give the initial high rating I believed it would deserve.

Excited to learn what will occur in SQUIRE nonetheless. Keladry was made to be the heroine of this series and it shows.

2 thoughts on “Page: Book 2 of the Protector of the Small Quartet”