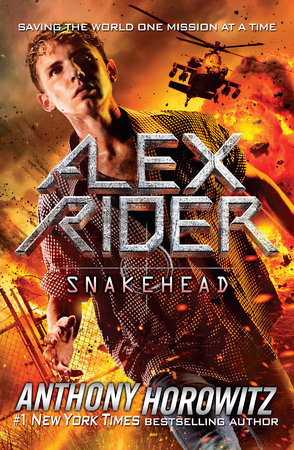 When Alex Rider crash-lands off the coast of Australia, the Australian Secret Service recruits him to infiltrate one of the ruthless gangs operating across Southeast Asia. Known as snakeheads, the gangs smuggle drugs, weapons, and worst of all, people. Alex accepts the assignment, in part for the chance to work with his godfather and learn more about his parents. What he uncovers, however, is a secret that will make this his darkest and most dangerous mission yet . . . and the knowledge that his old nemesis, Scorpia, is anything but out of his life.

Alex Rider’s most intense mission as of date. It’s possible that I actually admit that in every one of my reviews of these books, but it truly feels as though the more the series progresses, the higher the stakes and level of difficulty.

Normally I read these books to entertain myself. I know the danger is fictive and I know Alex Rider will always come out of his life-threatening missions alive. So I don’t bother to imagine an outcome with Alex Rider on his deathbed, because I know that will never happen.

Still, this story terrified me. We’re not in Kansas anymore. What I mean is that the missions are not so easy anymore. In the past, Alex Rider had needed to infiltrate a boarding school, pretend to be a member of a couple of families and track numerous people. I now look back on some of his previous missions and find them rather childish compared to this one.

Because the evil organization Scorpia is a living nightmare. They do all sorts of illegal stuff, like fights, smuggling, assassinations and human and organ trafficking. The moment you mention human and organ trafficking to me, I am going to start taking you very, very seriously. For the first time, I was scared for Alex and was not entertained one bit. I mean, the story is captivating, but there wasn’t a moment where I was able to smile or laugh. The atmosphere is also darker than in the other books.

It all felt so real. Too real to pretend it’s just a story. Even Alex felt that because he was less (but still a little bit) reckless than in the previous books. Some people mentioned this fact in their reviews: Anthony Horowitz’s stories are methodical. You know MI6 will make an appearance sooner or later and you know Alex will escape sudden deaths in many unrealistic ways. More often than not, people don’t kill him because they are too fascinated with him. The way Alex carries on his missions is also quite planned.

But I’ve gotten used to it so I don’t mind. If, however, you prefer a series to REALLY progress and introduce original new elements and characters, well… I still recommend it. I usually wouldn’t, but I believe Alex to be a character worth getting to know. He doesn’t age, which I find most peculiar, but fortunately, he is already mature. Plus the actions scenes are well-written and surprising.

On to the next one!