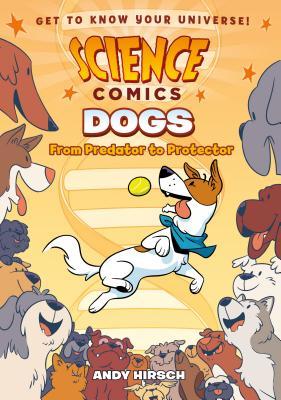 Science Comics: Dogs: From Predator to Protector by Andy Hirsch

How well do you know our favorite furry companion? Did they really descend from wolves? What’s the difference between a Chihuahua and a Saint Bernard? And just how smart are they? Join one friendly mutt on a journey to discover the secret origin of dogs, how genetics and evolution shape species, and where in the world his favorite ball bounced off to.

My brother just announced to me that he wants to adopt a dog, a decision I entirely support, so I felt motivated to read this book after I watched him be so excited at the idea of having a furry companion in his apartment.

This is a good book for kids who want to learn more about genetics and the behaviours of dogs. I mainly recommend it to young readers because it contains many logical facts that are universally known. I already knew at least 70% of what the author discussed in this book.

For instance, everybody knows that animals do not actually understand human language. What they do, however, do is associate words with behaviours or objects. Like, if you shove a ball in a dog’s face and say ‘‘ball’’ a couple of times, they’re going to connect the sound with the ball and get excited in the anticipation of playing with the object in question.

What I enjoyed learning about most were the different theories presented and experiences conducted. I honestly thought all dogs became friendly towards human beings naturally, not that experiences were made to make them so. Of course some of it happened naturally, but humans became obsessed with domestic animals pretty early on and studied them closely.

I just wish the author had dug deeper since my mind is telling me that there must be more. The author stayed on familiar ground at all times, discussing only popular contexts and subjects in regards to dogs. I wish he had paid more importance to the different interactions between dogs and other animals as well as the roles of dogs when it comes to helping human beings. He mentioned rapidly that they can smell cancer, but I had hoped he would focus on a specific case to prove and illustrate this fact.

Not bad. Quite enjoyable actually and very accessible to young readers. It just could have contained more surprising information.