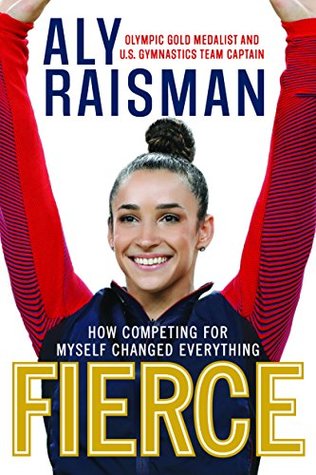 Fierce: How Competing for Myself Changed Everything by Aly Raisman

Aly Raisman first stepped onto a gymnastics mat as a toddler in a “mommy & me” gymnastics class. No one could have predicted then that sixteen years later, she’d be standing on an Olympic podium, having achieved her dreams. Aly’s road to success was full of hard work, perseverance, and victories, but not without its hardships. Aly faced many obstacles, from naysayers who said she’d never make it in gymnastics to classmates who shamed her for her athletic body to a devastating betrayal of trust. Through it all, Aly surrounded herself with supportive family, friends, and teammates and found the inner strength to remain positive and believe in herself. Now, in her own words, Aly shows what it takes to be a champion on and off the floor, and takes readers on a behind-the-scenes journey before, during, and after her remarkable achievements in two Olympic Games–through her highest highs, lowest lows, and all the moments in between.

This memoir answered a question that I have asked myself for a long time: How does an athlete become an Olympian?

Most of us watch the Olympic Games, but what we don’t always see is the behind-the-scenes. How does one athlete get picked above the others to compete and why? After all, they don’t magically appear at the event.

US gymnast Aly Raisman brings us back to the beginning, before she was selected to be part of the 2012 and 2016 Olympic teams. She talks about her dream of becoming an Olympian as a kid and the many challenges she faced in order to fulfil that dream.

What is most appealing about Aly Raisman is that she is not a child prodigy. She was not born with an innate ability to perform gymnastics spectacularly well. She was (and still is) good—great, even—but only because she was passionate about the sport and put in the work necessary to stand out.

I prefer reading about someone who struggles with some things, but eventually finds ways of overcoming these obstacles thanks to hard work, than someone who is naturally perfect at everything.

Some of Aly Raisman’s words hit home, because truth is I am not performing as well as I had hoped in my courses at university. My grades are *fine* but nothing close to what they were in CEGEP. I started to think that maybe university was not for me. Now I realize that thought is nonsense. Of course university—and so education—is for me, just like it is for everyone who is ready to put the efforts required. I have to study more than I did the previous years and never again register for four Art History courses in the same semester.

There are so few books out there about gymnastics, whether fiction or nonfiction, that I immediately requested this memoir when I stumbled across it. It was everything I hoped for and more.

Not only does Aly talk about her experience competing as an elite gymnast, she also opens up about her nutrition and how it affected her performances, which sometimes lead to injuries. Moreover, she discusses body image, mental health, social life as a gymnast and even abuse. She is honest and frankly an amazing, much needed role model.

I will admit that the memoir becomes somewhat repetitive, seeing that she describes many, many competitions. That is the only reason why I cannot give it five stars. But I understand her need to chronicle every competition and camp (or so) leading to the 2012 and 2016 Olympic Games.

Hands down the best sports-themed memoir I have read. I am also thankful that Aly did not use a ghostwriter. Everything is Aly.

One thought on “Fierce – Aly Raisman”